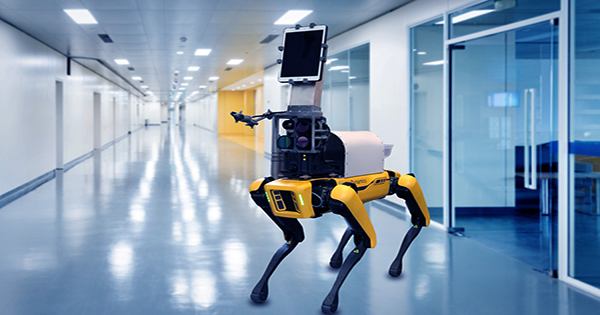 A group of scientists from the University of Bristol in the United Kingdom, along with Ukrainian academics and engineers, braved the Chernobyl Nuclear Power Plant’s guts to conduct fresh radiation mapping study. A Boston Dynamics dog robot joined them on their tour to try out its radiation “sniffing” skills, adding a bit of post-apocalyptic flavor to the endeavor. The main goal of this trip was to learn more about the value of autonomous and semi-autonomous robots in detecting radiation in high-radiation areas and assessing the remaining radiological threats in the ruins of the power plant. One of the devices was Boston Dynamics’ infamous robot dog “Spot,” which was equipped with radiation detection equipment.

As for the humans on the project, they also toured much of the safer parts of the nuclear power plant, including the now-infamous control room of Reactor 4 where the disaster originated. Professor Tom Scott, Lead researcher at the University of Bristol and Co-Director of Robotics and AI in Nuclear (RAIN), said in a statement, “To really travel into the control room of the failing reactor was a tense and yet exhilarating experience.”

The Chernobyl Nuclear Power Plant was the location of the world’s worst nuclear disaster on April 26, 1986. The accident occurred during a safety test on one of the nuclear reactors’ steam turbine. The experiment, on the other hand, plague by mismanagement, was overseen by inexperienced individuals, and failed to take necessary safety precautions. An uncontrollable nuclear chain reaction ensued, resulting in explosions and the discharge of massive amounts of radioactive pollution into the atmosphere. The Ukrainian government is still working on the decommissioning and dismantling project for the power facility.

Given the significant quantities of dangerous radiation still present at the site, a robot-led clean-up crew makes sense. However, the technology was just not available until lately. This new initiative aimed to illustrate how robots and autonomous radiation mapping technologies could utilize safely end the power plant’s final chapter now that it has entered a new phase of decommissioning.

Professor Scott remarked, “Robots can make nuclear decommissioning faster, cheaper, and, most importantly, safer.” “Most importantly, this scientific data will inform future planning for the eventual removal of fuel-containing material from the Shelter facility, and will ultimately aid Chernobyl’s transformation – and the area surrounding it – into an environmentally safe place,” said Dr Maxim Saveliev, Senior Researcher at Ukraine’s Institute for Safety Problems of Nuclear Power Plants (ISPNPP).