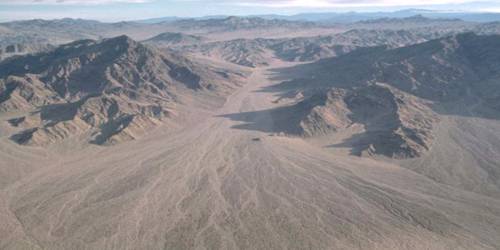 Bajada: Consecutive series of alluvial fans forming along the edge of a linear mountain range. The surface of this feature undulates in a rolling fashion as one move from the center of one alluvial fan to another. Normally occur in arid climates. The usage of the term in landscape description or geomorphology derives from the Spanish word bajada, generally having the sense of “descent” or “inclination”.

A bajada, or slope, at a mountain’s base, is formed of eroded sand and gravel. More humidity is trapped and accessible to plants in a course, well-drained soil. It is consists of a series of coalescing alluvial fans along with a mountain front. These fan-shaped deposits form from the deposition of sediment within a stream onto flat land at the base of a mountain. Plant development begins before in the warmer soil of this south-facing bajada, which allows a larger assortment of plants to grow here than on the bajada transversely the valley. 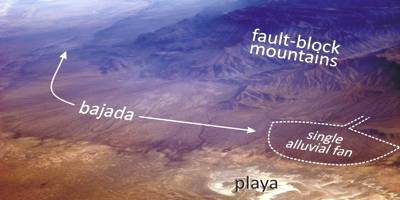 A bajada is typically tranquil of rough alluvium and may even have huge boulders interbedded in it. The slope is generally less than 7°. In moist climates, landforms of this character are generally referred to as piedmonts.