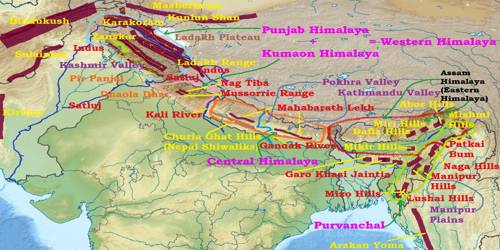 The Himachal and Uttaranchal Himalayas

This part lies approximately between the Ravi in the west and the Kali (a tributary of Ghaghara) in the cast. It is drained by two major river systems of India, i.e., the Indus and the Ganga. Tributaries of the Indus include the river Ravi, the Bcas, and the Satluj, and the tributaries of Ganga flowing through this region include the Yamuna and the Ghaghara. The northernmost part of the Himachal Himalayas is an extension of the Ladakh cold desert, which lies in the Spiti subdivision of district Lahul and Spiti. All the three ranges of Himalayas are prominent in this section also. These are the Great Himalayan range, the Lesser Himalayas (which is locally known as Dhaoladhar in Himachal Pradesh and Nagtibha in Uttaranchal) and the Shiwalik range from the North to the South. 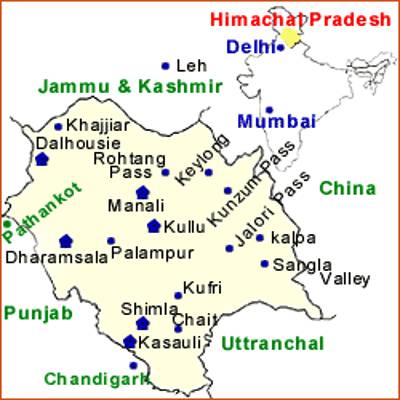 In this section of Lesser Himalayas, the altitude between 1,000-2,000 especially attracted to the British colonial administration, and subsequently, some of the important hill stations such as Dharamshala, Mussooric, Shimla, Kausani and the cantonment towns and health resorts such as Shimla, Mussooric, Kasauli, Almora, Lansdowne, and Ranikhet, etc. were developed in this region. The two distinguishing features of this region from the point of view of physiographic are the ‘Shiwalik’ and ‘Dun formations’. Some important duns located in this region are the Chandigarh-Kalka dun, Nalagarh dun, Dehra Dun, Harike dun and the Kota dun, etc.

Dehra Dun is the largest of all the duns with an approximate length of 35-45 km and a width of 22-25 km. In the Great Himalayan range, the valleys are mostly inhabited by the Bhotia’s. These are nomadic groups who migrate to ‘Bugyals’ (the summer grasslands in the higher reaches) during summer months and return to the valleys during winters. The famous Valley of flowers’ is also situated in this region. The places of pilgrimage such as the Gangotri, Yamunotri, Kedarnath, Badrinath and Hemkund Sahib are also situated in this part.