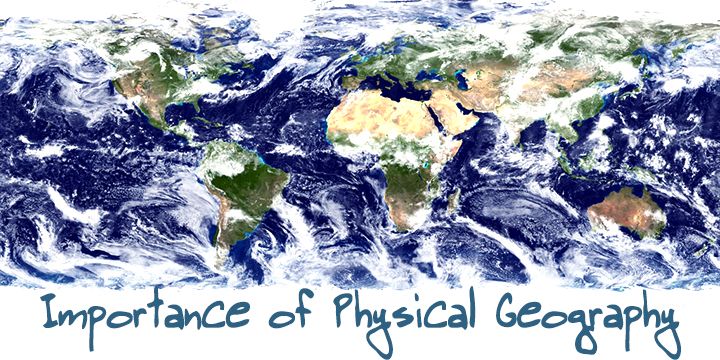 Physical geography is the study of the aspects and environment of the earth’s hard surface and oceans, atmosphere and weather, allocation of plant and animal life, etc. It is the study of our planet and its structure, e.g., ecosystems, climate, atmosphere, etc.

Physical geography is the branch of geography dealing with natural features and processes. It includes the study of lithosphere (Examples: landforms, drainage, relief and physiography), atmosphere (its composition, formation, elements and controls of weather and temperature, pressure, winds, rainfall, climatic types, etc.), hydrosphere (oceans, seas, lakes and related features with water realm) and biosphere (life forms including human being and macro-organism and their supporting mechanism, viz. food chain, ecological parameters and ecological balance). Soils are formed through the process of pedogenesis and depend upon the parent rocks, climate, biological activity, and time.

Physical Geography plays a very vital role in the very existence of human beings. Every student who studies about the planet earth should also study Physical Geography. This is because physical geography involves the study of the natural processes of the earth.

The study of physical Geography is essential for the sufficient allocation of the natural resources on the earth. It is essential for enabling human resolution as per the adjacent conditions and to be improved informed in order to protect our planet earth.

Time provides maturity to soils and facilitates in the maturity of soil shapes. Each component is significant for human beings. Landforms give the base on which human activities are placed. The plains are utilized for agriculture. Plateaus provide forests and minerals. Mountains provide pastures, forests, tourist spots and are sources of rivers providing water to lowlands. Climate influences our house types, clothing and food habits. The weather has a thoughtful consequence on vegetation, cropping pattern, domestic animals farming, and several industries, etc. Human beings have developed technologies which adjust climatic elements in a restricted space such as air conditioners and coolers. Temperature and rainfall make sure the compactness of forests and quality of grassland.

For, example, in India, monsoonal rainfall sets the cultivation measure in motion. Rainfall recharges the soil water aquifer which later provides water for agriculture and household use. We study oceans which are the storehouse of resources. Besides fish and other sea-food, oceans are rich in mineral resources. India has developed the technology for collecting manganese nodules from the oceanic bed. Soils are renewable resources, which influence a number of economic activities such as agriculture. The fertility of the soil is both naturally determined and culturally induced. Soils also make available the foundation for the biosphere accommodating plants, animals, and microorganisms.

So, Geography is the study of the Earth’s overall surroundings and the creature that live in those environments. Physical geographers concern geomorphologic principals to study how landforms have changed in history, but ever more such principals are significant for contemporary applications.