Home Biology Structure and Functions of Stomata in Plants 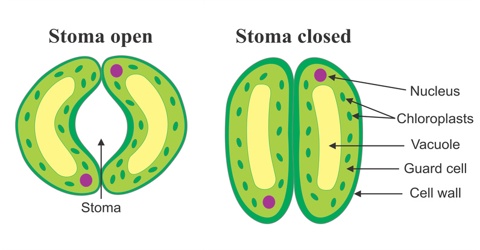 Structure and Functions of stomata in Plants

Stomata are tiny openings or pores in plant tissue that allow for gas exchange. Some minute pores which are usually, found in leaf for the exchange of gas and transpiration are known as stomata. They are typically found in plant leaves and can also be found in stems and other parts of plants. Simply, when a leaf is examined under the microscope, we observe many tiny pores, which are collectively called stomata. The gas exchange that occurs when stomata are open facilitates photosynthesis. Photosynthesis is the process by which plants convert sunlight into usable energy. 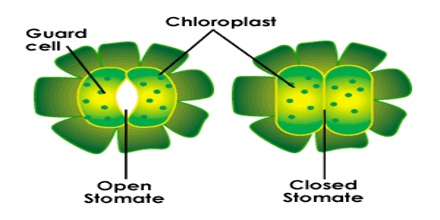 Position: Stomata are present in the green part of leaf, stem, green sepals and green outer layer of glower. They are the minute openings, generally found in the epidermis of leaves. Stomata are present on the lower epidermis of dorsiventral leaves, upper and lower epidermis of isolateral leaves and partly on the floating leaves of aquatic plants. It plays a significant role by permitting the movement of gases such as oxygen, carbon dioxide, and water vapor to disperse between the interior and outer surface of the plant tissues.

The two main functions of stomata are to allow for the uptake of carbon dioxide and to limit the loss of water due to evaporation. Stomata allow a plant to take in carbon dioxide, which is needed for photosynthesis. They also help to reduce water loss by closing when conditions are hot or dry. The gaseous exchange (CO2 and O2) between the intercellular spaces of plant cells and the outer air takes place through stomata during photosynthesis. During respiration, plants receive O2 and release CO2 through stomata.