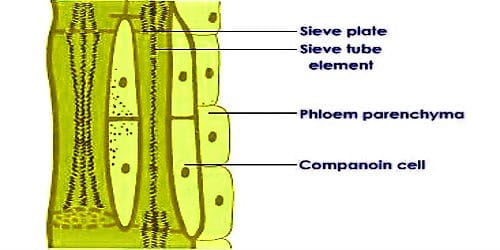 Phloem tissue is the kind of tissue, made of some living and dead cells which have the chief function to conduct prepared food materials from leaf to different parts of the plant body is called phloem tissue. The phloem is dependable for the transportation of food substance from leaves to the other parts of the plant.

The phloem tissue consists of the following four elements: 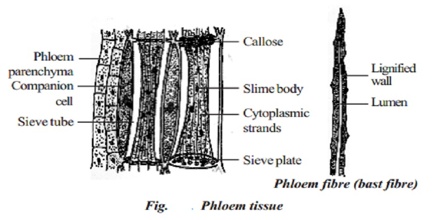 Sieve tubes: They represent the most active food conducting elements in the phloem tissue. Each sieve tube is formed by a series of hollow, cylindrical cells called sieve tube cells arranged one above the other.

Companion cells: They are more or less spindle shaped cells associated with the sieve tube cells. Each companion cell is found attached to any one lateral surface of a sieve cell.

Phloem parenchyma: They are represented by a group of living parenchyma cells that are found in-between the sieve tubes. They are meant only for the storage of organic food.

Phloem sclerenchyma: These fibers are represented by the dead sclerenchyma fibers that are found in between the sieve tubes. They are meant only for providing mechanical support.