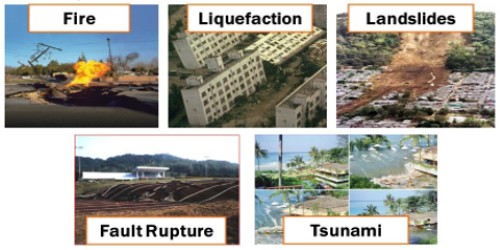 Earthquakes are by far the most unpredictable and highly destructive of all the natural disasters. The idea of an earthquake is often associated with fear and horror due to the scale, magnitude, and suddenness at which it spreads disasters on the surface of the earth without discrimination. These earthquakes result from a series of earth movements brought about by a sudden release of energy during the tectonic activities in the earth’s crust. As compared to these, the earthquakes associated with the volcanic eruption, rock fall, landslides, subsidence, particularly in the mining areas, impounding of dams and reservoirs. etc. have a limited area of influence and the scale of damage. Apart from the path of death and destruction of human assets that it left behind, it also caused widespread devastation of environmental habitats with the lasting effect on the populations of numerous species.

It becomes a calamity when it strikes the areas of high density of population. It not only damages and destroys the settlements, infrastructure, transport and communication network, industries and other developmental activities but also robs the population of their material and socio-cultural gains that they have preserved over generations. It renders them homeless, which puts an extra-pressure and stress, particularly on the weak economy of the developing countries.