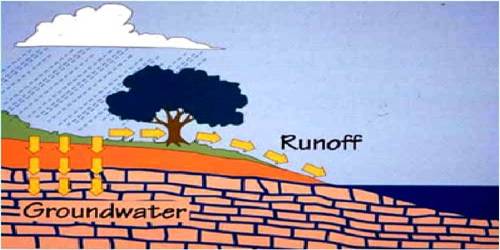 Runoff: It is the flow of water over land through different channels. It is the draining away of water (or substances carried in it) from the surface of an area of land, a building or structure, etc.

Runoff that happens on the earth exterior before reaching a channel is also called a nonpoint foundation. If a nonpoint basis surrounds man-made contaminants or natural appearances of contamination (such as rotting leaves) the runoff is called nonpoint basis pollution. A land region which produces runoff that drains to a general point is called a drainage basin. When runoff flows along the soil, it can pick up soil contaminants counting petroleum, pesticides, or fertilizers that become release or nonpoint basis pollution. It reasons erosion, and also carries chemicals and materials on the earth surface along to the rivers where the water ends up. So, it can reason water pollution too.

Runoff, of course, happens throughout storms, and much more water flows in rivers (and as runoff) throughout storms. For example, in 2001 throughout a foremost storm at Peachtree Creek in Atlanta, Georgia, the amount of water that flowed in the river in one day was 7 percent of all the streamflow for the year.