Home Geology Identify of the Sun, Earth and Moon 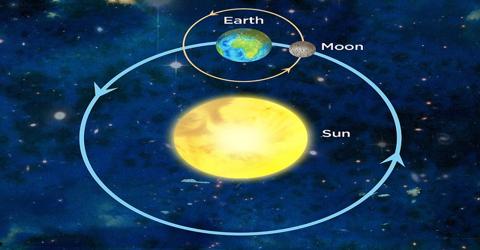 You have known that our sun is one of the stars of the Milky Way galaxy. The solar system is made up of the Sun, the planets that orbit the Sun, their satellites, dwarf planets and many, many small objects, like asteroids and comets. Sun is a star because it has its own light. Actually sun is a lump of gases. Hydrogen gas and other gases held together in it due to gravitational forces. Hydrogen gas at the time of mutual interactions with each other produces huge amount of heat and light. Then that heat and light is scattered in all directions. Eight planets orbit round the sun keeping it in the centre. The earth is one of these planets. The shape of the earth is like a sphere. There are various gaseous substances in the earth. But the earth cannot produce beat and light like sun. That’s why the earth depends on the sun for light and heat. The trees product food using sun light. The existence of animals too depends on the production of food by the plants. The earth is not going to be very cool as the heat is coming how the sun. In this way the heat and light of the sun save the life on the earth.

It takes the moon 27 days 8 hours to orbit the earth once. The volume of moon is one-fifth of the earth. The sun is thirteen lac times greater than the earth. The sun and the moon look equal as we see them in the sky, don’t they? Why do they appear to be of the same size? The sun is too 6r away from us, so it looks much smaller than its actual size. Assume, if the size of the sun is like that of a football, what will be the size of the earth alike? Then the earth will be equal to a sand particle.

We know that the earth is a suitable place for men and other animals. Do the animals; reside in any other planets, stars or satellites besides the earth? They could be small, big or any type of animal. Scientists are searching, whether there is existence of life in any other planets. But till now the existence of life was not found in any place except the earth. Why then there is life only on earth”‘ What specialty is there on earth for which the creature can live here?

It is assumed that, when the sun was created then its remaining portion was floating in the space like dust particles. After millions of years of that these dust particles came together and created the earth. At the beginning the earth was too hot -so much hot that the earth would boil with bubbles. There was no no liquid water which is essential for life. There was no oxygen in the atmosphere. Should the earth remain in that state, ‘the appearance of life would not be possible.

Gradually heat was released and the earth cooled down. At the time of cooling the heavy particles went towards the centre. And the light particles remained near the surface of the earth. Gaseous substances such as carbon dioxide, water vapor, methane, carbon-monoxide etc. formed the atmosphere. After that the earth cooled down more and the water vapor convened to liquid water which created the sea. The amount of oxygen and nitrogen increased in the atmosphere. These elements are essential for life. Following the production of these elements on the earth life is created at last, and the creature started to exist on earth.