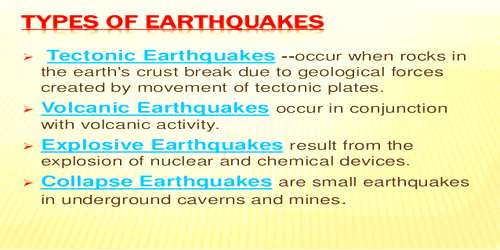 There are many diverse types of earthquakes: tectonic, volcanic, and explosion. The type of earthquake depends on the area where it occurs and the geological makeup of that region.

(i) The most common ones are the tectonic earthquakes. These are generated due to sliding of rocks along a fault plane. A tectonic earthquake is one that occurs when the earth’s crust breaks due to geological forces on rocks and adjoining plates that cause physical and chemical changes.

The earthquakes that happen in the areas of large reservoirs are referred to as reservoir-induced earthquakes.

Which factors are determining the Climate of India?