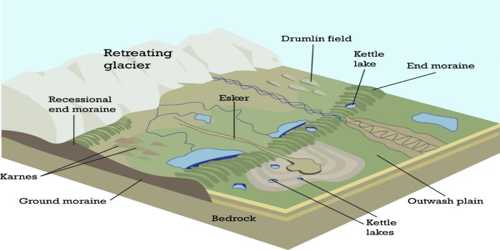 When glaciers melt in summer, the water flows on the surface of the ice or seeps down along the margins or even moves through holes in the ice. These waters accumulate beneath the glacier and flow like streams in a channel beneath the ice. Such streams flow over the ground (not in a valley cut in the ground) with ice forming its banks. Very coarse materials like boulders and blocks along with some minor fractions of rock debris carried into this stream settle in the valley of ice beneath the glacier and after the ice melts can be found as a sinuous ridge called esker. 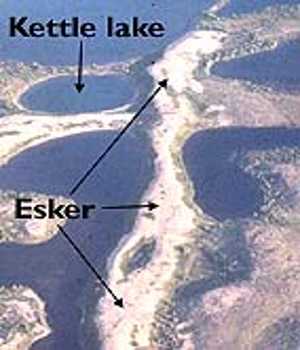 Esker formation presumably takes place after a glacier stagnates, because the movement of the ice would likely spread the material and produce ground moraine. They are usually formed of washed sand and gravel. Eskers vary in shape and size. Most are sinuous, with a height of a few to several tens of meters. The longest continue for several km but most are shorter or discontinuous. Notable areas of eskers are found in Maine, U.S.; Canada; Ireland; and Sweden.