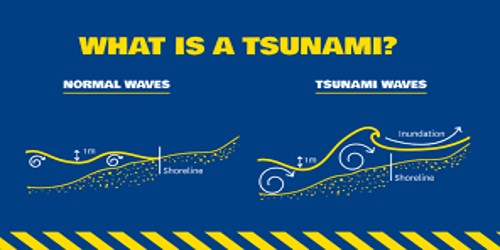 Earthquakes and volcanic eruptions that cause the sea-floor to move abruptly resulting in the sudden displacement of ocean water in the form of high vertical waves are called tsunamis (harbor waves) or seismic sea waves. Normally, the seismic waves cause only one instantaneous vertical wave; but, after the initial disturbance, a series of after waves are created in the water that oscillates between a high crest and low trough in order to restore the water level. 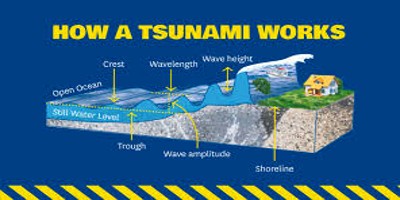 The speed of the wave in the ocean depends upon the depth of the water. It is more in the shallow water than in the ocean deep. As a result of this, the impact of the tsunami is less over the ocean and more near the coast where they cause large-scale devastations. Therefore, a ship at sea is not much affected by the tsunami and it is difficult to detect a tsunami in the deeper parts of the sea. It is so because over deep water the tsunami has very long wavelength and limited wave-height. Thus, a tsunami wave raises the ship only a meter or two and each rise and fall takes several minutes. As opposed to this, when a tsunami enters shallow water, its wave-length gets reduced and the period remains unchanged, which increases the wave-height. Sometimes, this height can be up to 15m or more, which causes large-scale destructions along the shores. Thus, these are also called Shallow Water Waves. Tsunamis are frequently observed along the Pacific ring of fire, particularly along the coast of Alaska, Japan, Philippines and other islands of South-east Asia, Indonesia, Malaysia, Myanmar, Sri Lanka, and India etc.

After reaching the coast, the tsunami waves release enormous energy stored in them and water flows turbulently onto the land destroying port-cities and towns, structures, buildings and other settlements. Since the coastal areas are densely populated the world over, and these are also centers of intense human activity, the loss of life and property is likely to be much higher by a tsunami as compared to other natural hazards in the coastal areas.