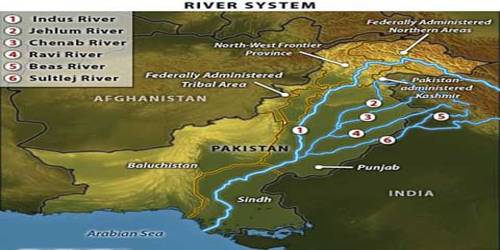 The Ganga System of Himalayan Drainage

The Ganga is the most important river of India both from the point of view of its basin and cultural significance. It rises in the Gangotri glacier near Gaumukh (3.900 m) in the Uttarkashi district of Uttaranchal. Here, it is known as the Bhagirathi. It cuts through the Central and the Lesser Himalayas in narrow gorges. At Devprayag, the Bhagirathi meets the Alaknanda; hereafter, it is known as the Ganga. The Alaknanda has its source in the Satopanth glacier above Badrinath. The Alaknanda consists of the Dhauli and the Vishnu Ganga which meet at Joshimath or Vishnu Prayag. The other tributaries of Alaknanda such as the Pindarjoin it at Karna Prayag while Mandakini or Kali Ganga meets it at Rudra Prayag. The Ganga enters the plains at Haridwar. From here, it flows first to the south, then to the south-east and east before splitting into two distributaries, namely the Bhagirathi and the Hugli. The river has a length of 2,525 km. It is shared by Uttaranchal (110 km) and Uttar Pradesh (1,450 km), Bihar (445 km) and West Bengal (520 km). The Ganga basin covers about 8.6 lakh sq. km area in India alone. The Ganga river system is the largest in India has a number of perennial and non-perennial rivers originating in the Himalayas in the north and the Peninsula in the south, respectively. The Son is its major right bank tributary. The important left bank tributaries are the Ramganga, the Gomati, the Ghaghara, the Gandak, the Kosi and the Mahanada. The river finally discharges itself into the Bay of Bengal near the Sagar Island.

The Yamuna, the westernmost and the longest tributary of the Ganga, has its source in the Yamunotri glacier on the western slopes of Banderpunch range (6,316 km). It joins the Ganga at Prayag (Allahabad). It is joined by the Chambal, the Sind, the Betwa and the Ken on its right bank which originates from the Peninsular plateau while the Hindan, the Rind, the Sengar, the Varuna, etc. join it on its left bank. Much of its water feeds the western and eastern Yamuna and the Agra canals for irrigation purposes.