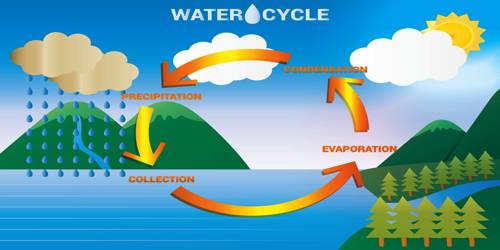 All living organisms, the atmosphere, and the lithosphere maintain between them a circulation of water in the solid, liquid, or gaseous form referred to as the water or hydrologic cycle. In the hydrologic cycle, water from oceans, lakes, swamps, rivers, plants, and even you can turn into water vapor. Water vapor condenses into millions of tiny droplets that form clouds. Clouds lose their water as rain or snow, which is called precipitation. Precipitation is either absorbed into the ground or runs off into rivers. Water that was absorbed into the ground is taken up by plants. Plants lose water from their surfaces as vapor back into the atmosphere. Water that runs off into rivers flows into ponds, lakes, or oceans where it evaporates back into the atmosphere. 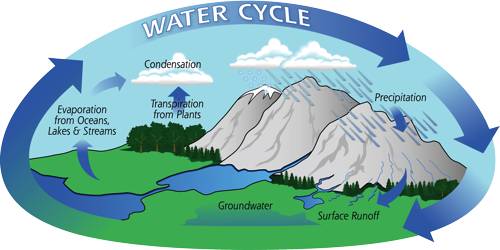 The water cycle describes how water evaporates from the surface of the earth, rises into the atmosphere, cools and condenses into rain or snow in clouds, and falls again to the surface as precipitation. It involves the exchange of energy, which leads to temperature changes. For instance, when water evaporates, it takes up energy from its surroundings and cools the environment. When it condenses, it releases energy and warms the environment. These heat exchanges influence climate.

The water falling on land collects in rivers and lakes, soil, and porous layers of rock, and much of it flows back into the oceans, where it will once more evaporate. The cycling of water in and out of the atmosphere is a significant aspect of the weather patterns on Earth.