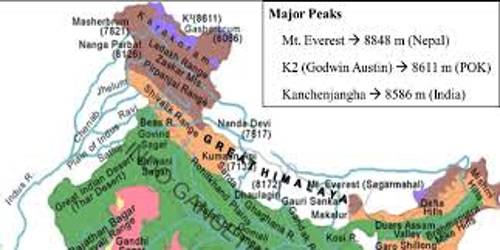 The North and Northeastern Mountains consist of the Himalayas and the Northeastern hills. The Himalayas consist of a series of parallel mountain ranges. Some of the important ranges are the Greater Himalayan range, which includes the Great Himalayas and the Trans-Himalayan range, the Middle Himalayas, and the Shiwalik. The Himalayan Ranges include the Greater Himalaya, Lesser/Middle Himalaya, and the Siwalik Range. The general orientation of these ranges is from northwest to the southeast direction in the northwestern part of India.

The Himalayas in the Darjiling and Sikkim regions lie in an east-west direction, while in Arunachal Pradesh they are from southwest to the northwest direction. In Nagaland, Manipur, and Mizoram, they are in the north-south direction. The approximate length of the Great Himalayan range, also known as the central axial range, is 2,500 km from cast to west, and their width varies between 160-400 km from north to south. It is also evident from the map that the Himalayas stand almost like a strong and long wall between the Indian subcontinent and the Central and East Asian countries.

Characteristics of the North and Northeastern Mountains – 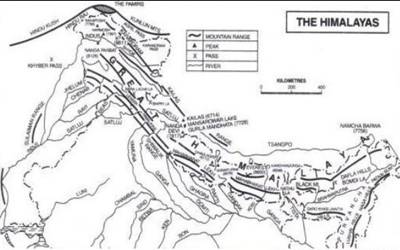 There are large-scale regional variations within the Himalayas. The Brahmaputra marks the eastern border of Himalayas. Beyond the Dihang gorge, the Himalayas bend sharply towards the south and from the Eastern hills of Purvanchal. On the basis of relief, alignment of ranges and other geomorphologic features, the Himalayas can be divided into the following sub-divisions:

(i) Kashmir or Northwestern Himalayas

Importance of these areas –