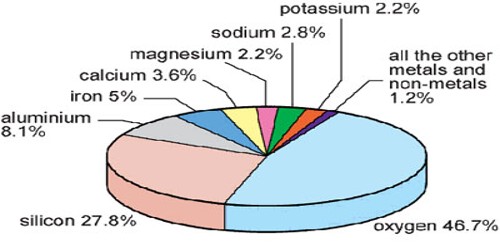 The earth is composed of various kinds of elements. These elements are in solid form in the outer layer of the earth and in the hot and molten form in the interior. About 98 percent of the total crust of the earth is composed of eight elements like oxygen, silicon, aluminum, iron, calcium, sodium, potassium, and magnesium (Table), and the rest is constituted by titanium, hydrogen, phosphorous, manganese, sulfur, carbon, nickel and other elements.

Table: The Major Elements of the Earth’s Crust 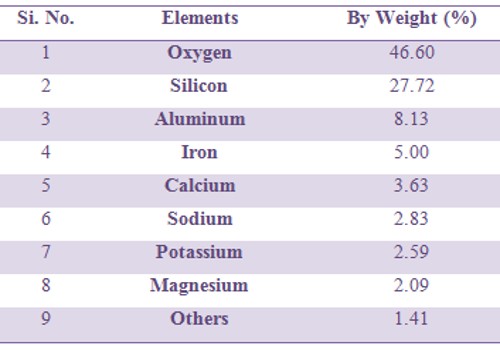 The elements in the earth’s crust are rarely found exclusively but are usually combined with other elements to make various substances. These substances are recognized as minerals.

Though the numbers of elements making up the lithosphere are limited they are combined in many different ways to make up many varieties of minerals. There are at least 2,000 minerals that have been named and identified in the earth crust, but almost all the commonly occurring ones are related to six major mineral groups that am known as the major rock-forming minerals.

The basic source of all minerals is the hot magma in the interior of the earth. When magma cools, crystals of minerals appear and a systematic series of minerals are formed in sequence to solidify so as to form rocks. Minerals such as coal, petroleum, and natural gas are organic substances found in solid, liquid, and gaseous forms respectively.