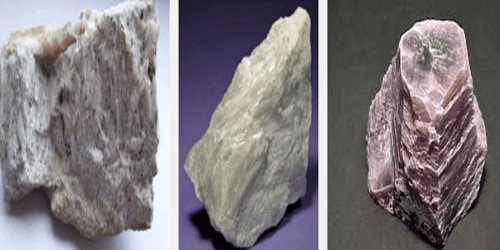 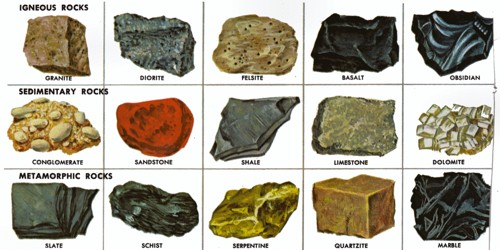 The earth’s crust is composed of rocks. A rock is an aggregate of one or more minerals. Rock may be hard or soft and in varied colours. For example, granite is hard, soapstone is soft. Gabbro is black and quartzite can be milky white. Rocks do not have definite composition of mineral constituents. Feldspar and quartz are the most common minerals found in rocks.

As igneous rocks form out of magma and lava from the interior of the earth, they are known as primary rocks. The igneous rocks (Ignis -in Latin means ‘Fire’) are formed when magma cools and solidifies. When magma in its upward movement cools and turns into solid form it is called igneous rock. The process of cooling and solidification can happen in the earth’s crust or on the surface of the earth.

The word ‘sedimentary’ is derived from the Latin word sedimentum, which means settling. Rocks (igneous, sedimentary and metamorphic) of the earth’s surface are exposed to denudational agents, and are broken up into various sizes of fragments. Such fragments are transported by different exogenous agencies and deposited. These deposits through compaction turn into rocks. This process is called lithification. In many sedimentary rocks, the layers of deposits retain their characteristics even after lithification. Hence, we see a number of layers of varying thickness in sedimentary rocks like sandstone, shale etc.

The word metamorphic means ‘change of form’. These rocks form under the action of pressure, volume and temperature (PVT) changes. Metamorphism occurs when rocks are forced down to lower levels by tectonic processes or when molten magma rising through the crust comes in contact with the crustal rocks or the underlying rocks are subjected to great amounts of pressure by overlying rocks. Metamorphism is a process by which already consolidated rocks undergo recrystallization and reorganization of materials within original rocks.

Variability of Solar Radiation at the Surface of Earth