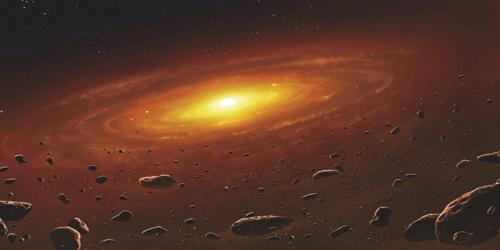 The planets in our Solar System are believed to have created from the similar rotating disc of dust that formed the Sun. This disc, called the solar nebula, was composed primarily of hydrogen and helium, but also had other elements in minor proportions. 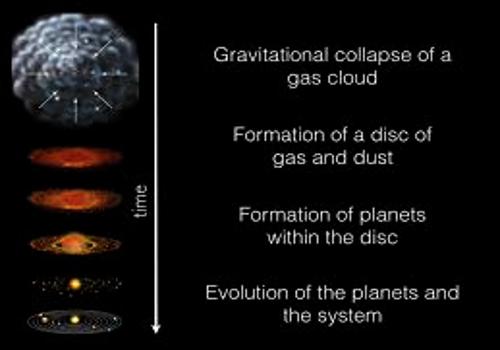 The following are considered to be the stages in the development of planets:

(1) The stars are localized lumps of gas within a nebula. About 4.6 billion years ago, as the theory goes, the location of today’s Solar System was nothing more than a loose collection of gas and dust — what we call a nebula. The gravitational force within the lumps leads to the formation of a core to the gas cloud and a huge rotating disc of gas and dust develops around the gas core.

(2) In the next stage, the gas cloud starts getting condensed and the matter around the core develops into small-rounded objects. These small-rounded objects by the process of cohesion develop into what is called planetesimals. Larger bodies start forming by collision and gravitational attraction causes the material to stick together. Planetesimals are a big number of smaller bodies.

(3) In the final stage, these huge number of little planetesimals accrete to form a fewer large bodies in the form of planets.