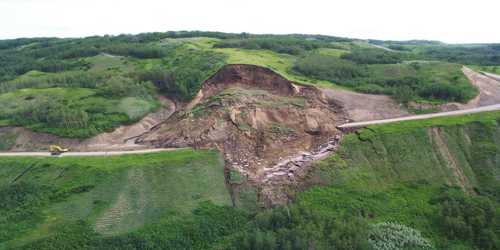 A landslide means a collapse of a mass of earth or rock from a mountain or cliff. These are known as relatively rapid and perceptible movements. The materials involved are relatively dry. The size and shape of the detached mass depend on the nature of discontinuities in the rock, the degree of weathering and the steepness of the slope. The cause of a landslide that has to do with the structural combination of rock, soil, and vegetation is the morphology. Depending upon the type of movement of materials several types are identified in this category. A slump is slipping of one or several units of rock debris with a backward rotation with respect to the slope over which the movement takes place (Figure). 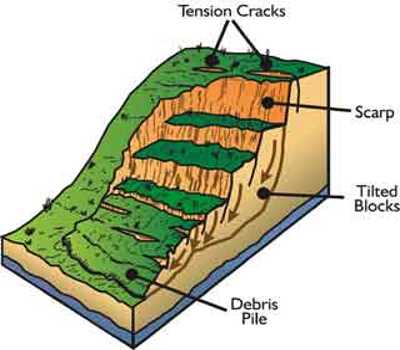 Rapid rolling or sliding of earth debris without backward rotation of mass is known as debris slide. Debris fall is nearly a free fall of earth debris from a vertical or overhanging face. Sliding of individual rock masses down bedding, joint or fault surfaces is Rockslide. Over steep slopes, rock sliding is very fast and destructive.