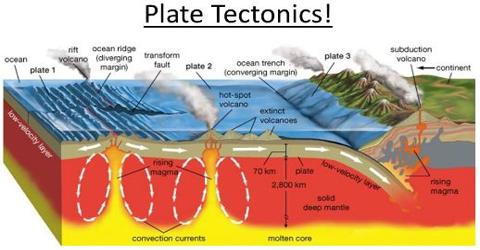 The basic conception of this theory is based on the finding that the lithosphere below the earth is separated into many portions or parts. These are called plates. These plates are in floating condition over a region of mantle zone. Plate tectonics is the theory that the outer rigid layer of the earth (the lithosphere) is divided into a couple of dozen “plates” that move around across the earth’s surface relative to each other, like slabs of ice on a lake. Plate tectonics is the theory that Earth’s outer shell is divided into several plates that glide over the mantle, the rocky inner layer above the core. These plates are displaced by few centimeters per year toward any direction. Sometime, these plates move away from one another. Again sometimes they come close to one another. Even some time plates moves up or down by few millimeters per a year. Where one plate comes in contact with another plate, that area becomes more prone to earth-quake and volcanic eruption.

If there are high hill or mountain in the areas where these plates are connected, occurrences of earth-quakes and volcanic eruptions are more likely to happen in those places.

It is assumed that when these Sates smack or strike one another, immense heat is produced and the substances inside the earth get melted due to this excessive heat. This melt substance gashes out from below the earth’s surface due to the pressure. This split, melted and hot liquids sit known as magma.