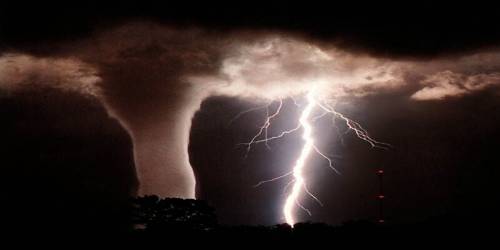 A storm (produced by a cumulonimbus cloud) that includes rain showers, lightning, and thunder. Severe local storms are thunderstorms and tornadoes. They are of short duration, occurring over a small area but are violent. Tornadoes don’t just pop into existence — they develop out of thunderstorms, where there’s already a steady, upward flow of warm, low-pressure air to get things started. Thunderstorms are caused by intense convection on moist hot days. A thunderstorm is a well-grown cumulonimbus cloud producing thunder and lightning. When the clouds extend to heights where sub-zero temperature prevails, hails arc formed and they come down as a hailstorm. If there is insufficient moisture, a thunderstorm can generate dust-storms.

A thunderstorm is characterized by the intense updraft of rising warm air, which causes the clouds to grow bigger and rise to a greater height. This causes precipitation. Later, downdraft brings down to earth the cool air and the rain. From severe thunderstorms sometimes spiraling wind descends like a trunk of an elephant with great force, with very low pressure at the center, causing massive destruction on its way. Such a phenomenon is called a tornado. Tornadoes generally occur in middle latitudes. The tornado over the sea is called water sprouts.

These violent storms are the manifestation of the atmosphere’s adjustments to varying energy distribution. The potential and heat energies are converted into kinetic energy in these storms and the restless atmosphere again returns to its stable state.