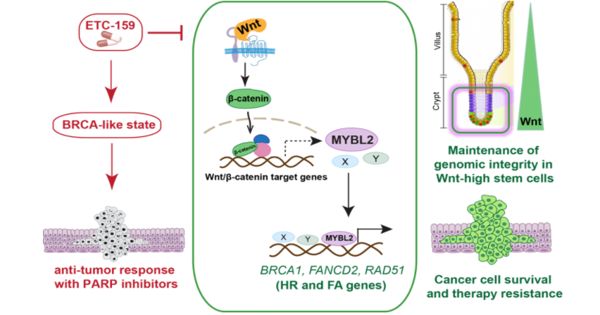 Researchers from Duke-NUS Medical School and Singapore’s Agency for Science, Technology, and Research (A*STAR) reported in the journal EMBO Mo that ETC-159, a made-in-Singapore anti-cancer drug currently in early phase clinical trials for use in a subset of colorectal and gynecological cancers, could also prevent some tumors from resisting therapies by blocking a key DNA repair mechanism.

Chemotherapy resistance is the single most important cause of treatment failure in cancer patients. Inhibitors of the enzyme poly (ADP ribose) polymerase (PARP), one of many cancer therapies, prevent cancer cells from repairing naturally occurring DNA damage, including unwanted/harmful breaks in the DNA. When there are too many breaks, the cell dies.

“Some cancers have an overactive Wnt signaling pathway, which may make them resistant to this type of DNA damage,” said Assistant Professor Babita Madan, a senior author of the study from Duke-NUS’ Cancer and Stem Cell Biology (CSCB) Programme. “Understanding how this pathway contributes to resistance to existing therapies may lead to the development of novel anti-cancer therapies.”

Wnt signaling proteins normally interact with cell receptors to promote the translocation of another protein, beta-catenin, into the nucleus, where it regulates the activation of several genes. “We discovered that when Wnt signaling sends beta-catenin into the nucleus, it activates a family of DNA break repair genes,” said Professor David Virshup, director of the CSCB Programme and study co-senior author. “Cancers with excessive Wnt signaling, such as colorectal cancer, have an enhanced ability to repair DNA breaks, allowing them to avoid the effects of PARP inhibitors.”

The researchers discovered that inhibiting Wnt signaling with the drug ETC-159 reversed PARP inhibitor resistance in several cancer cell lines. ETC-159 inhibits the porcupine enzyme, preventing the secretion of Wnt proteins. ETC-159 is being studied in a clinical trial for use in cancers with overactive Wnt signaling, among other indications.

According to the findings of this pre-clinical study, therapeutic doses of ETC-159 appear to be well tolerated by the gut without causing toxicity. This means that a low dose of ETC-159, given in conjunction with PARP inhibitors, could prevent cancer resistance to PARP inhibitor treatment while sparing intestinal stem cells, providing additional options for treating cancers with hyperactive Wnt signaling.

The researchers also discovered that the same signal for DNA repair aids in the prevention of mutations in stem cells residing within the intestinal epithelium, confirming the importance of normal Wnt signaling in stem cell maintenance. Cancer chemoresistance is caused by a variety of biological mechanisms, including drug efflux, cell death inhibition, detoxification, DNA damage repair, drug target substitution, stem cells, and epithelial to mesenchymal transition.

ETC-159 was developed collaboratively by Duke-NUS and the Experimental Drug Development Centre (EDDC), an A*STAR-hosted national drug discovery and development platform. The Wnt-pathway inhibitor is a novel small-molecule drug candidate that has the potential to treat a variety of cancers. It is currently being tested as a treatment for a subset of colorectal and gynecological cancers in clinical trials.

“These findings advance our understanding of how Wnt signaling promotes DNA repair in stem cells and cancers, preserving genomic integrity,” said Dr. May Ann Lee, group head at EDDC and senior author of the study. “On the other hand, interventions that block Wnt signaling may make some cancers more sensitive to radiation and other DNA-damaging agents.”

Researcher’s shows Loneliness is wired into the human brain