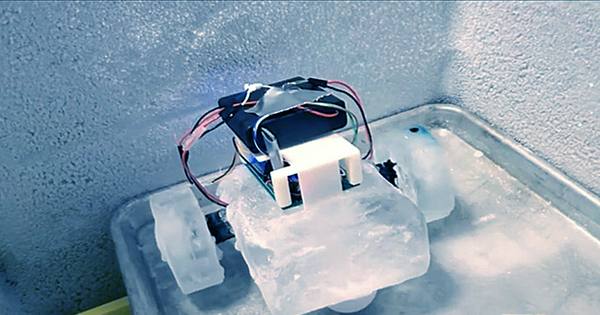 There are also some pretty weird but interesting ideas about how space exploration can be further enhanced recently, with the space race re-arranged to land Mars – among many other upcoming exciting initiatives. Last month, Japanese engineers suggested the design of wooden satellites to deal with space debris and in 2021 saw a remote-controlled car race on the moon, something scientists can only do.

The latest interesting invention comes from people at the University of Pennsylvania’s GRASP lab who want to dig up clunky metal robots that explore other planets and replace them with ice. That’s right, they believe that using ice to build robots allows easy and inexpensive construction and can even self-repair with the help of large amounts of ice on some planetary bodies.

In their study, presented at the IEEE / RSJ International Conference on International Robots and Systems (IROS), Devin Carroll and Mark Yim showed a proof-of-concept robot that could be driven primarily through ice making. IceBot has proven that not only can ice-based robots work, but it can also survive without melting for a while at room temperature – the authors report that IceBot applications will be in a cool environment that won’t cause any problems.

Carroll said in an interview with IEEE Spectrum, “One of the challenges of building robots for this field is not only the robots are expensive, but the natural elements will also break them down in time.” “Mark and I started exploring the idea of ​​building robots from found material as a way to add robustness to operating robotic systems in remote or hostile environments with a secondary goal of reducing the cost of the system.”

The current problem with planetary rovers and robots is their required intense reliability; if they make a mistake or hit a rough terrain and a wheel should be broken, in most cases that robot’s game is over. Sending a full space mission to fix a lonely rover will not be effective any time soon, and planets like Mars rarely stock extra wheels to stop for quick holes.

So instead, the researchers rejected any of the latter – anyone would expect robotics to be made from ice. Obviously, circuitry can’t be made with ice, but chassis and wheels can. If it were possible to build an efficient robot out of the ice, he said, many of the robot’s planets would literally have extra spare parts on the floor.

Better yet, the ice doesn’t need glue or laser cutters to sculpt the shape and structure, so the robot will probably be able to repair any brakes and even make its own parts in the future. Of these, robots crafted out of ice would be much cheaper than the composites currently in use and could be used to make disposable bots.

The icebox is a very early iteration and exists authentically as proof of the idea, so owners of electronic ice just won’t accept it yet, but it’s certainly an interesting idea. The researchers also said that the ice solves some of the problems, such as new problems such as the need to be cool enough to maintain the robot’s transport structure.