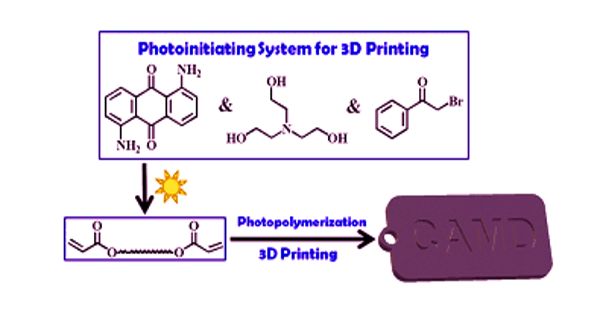 3D printing has revolutionized the way the world creates, influencing nearly every aspect of modern society—from the consumer market to aerospace and medical technologies. 3D printing has driven innovations in fields ranging from art to aerospace to medicine. One method of 3D printing involves selectively exposing the liquid resin to ultraviolet (UV) light, causing that resin to harden into a solid. However, the high-energy ultraviolet (UV) light used in most 3D printers to cure liquid resins into solid objects limits the technique’s applications. Now, scientists have developed a new resin that works with safer, more energy-efficient visible light. Light-driven 3D printing to convert liquid resins into solid objects has traditionally been dominated by engineering disciplines, yielding the fastest build speeds and highest resolution of any additive manufacturing process. The technology has gained traction in part by overcoming efficiency issues and intermediary processes, such as milling, carving, and machining, affiliated with conventional manufacturing.

Visible-light curing, which would be more appropriate for some uses, such as tissue engineering and soft robotics, is slow. Chemical innovation to shift the spectrum into more mild and tunable visible wavelengths promises to improve compatibility and expand the repertoire of accessible objects, including those containing biological compounds, nanocomposites, and multi-material structures. Now, researchers reporting in ACS Central Science have developed photopolymer resins that boost the speed of visible-light curing. 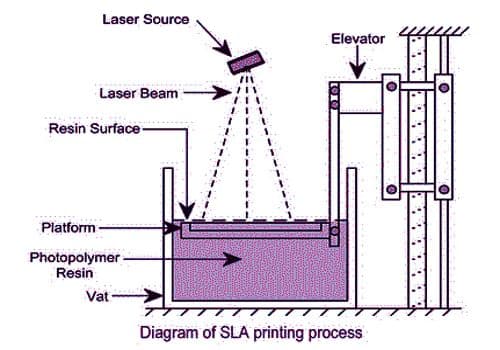 With the help of computer-aided design, 3D-printed objects are made by the successive layering of a material into a 3D shape, with each layer solidified or “cured” using UV light. The combination of electron-deficient and electron-rich co-initiators was critical to overcoming the speed-limited photocuring with visible light. Being able to use visible light for curing would have advantages, including reduced cost, improved biocompatibility, greater depth of light penetration, and reduced light scattering. A unique screening method was used to streamline optimization and correlate resin composition to resolution, cure rate, and mechanical performance. These attributes could open up new applications for 3D printing, such as making opaque composites, multi-material structures, or hydrogels containing live cells. Contemporary photocuring processes in 3D printing are initiated by high-energy ultraviolet (UV) light, which provides rapid polymerization and correspondingly short build times (∼seconds). However, because visible light is lower in energy than UV, visible-light curing is currently too slow to be practical. The high-energy ultraviolet (UV) light used in most 3D printers can damage the materials, which limits the method’s scope.

3D Printing allows the manufacture of complex shapes, which is useful in a wide variety of fields, from engineering to medicine and art.  The researchers developed violet-, blue-, green- and red-colored resins that contained a monomer, a photoredox catalyst (PRC), two co-initiators, and an opaquing agent. Zachariah A. Page, The University of Texas at Austin, USA, and colleagues have developed photopolymer resins that boost the speed of visible-light curing.  When the PRC absorbed visible light from LEDs, it catalyzed the transfer of electrons between the co-initiators, which generated radicals that caused the monomer to polymerize. The researchers prepared colored resins that contain a monomer, a photoredox catalyst (PRC), combined iodonium (donor) and borate (acceptor) co-initiators and an opaquing agent. The opaquing agent helped confine curing to the areas struck by light, which improved spatial resolution. When the PRC absorbs visible light from LEDs, it catalyzes the transfer of electrons between the co-initiators, which generates radicals that cause the monomer to polymerize. The optimized mix of components allowed the researchers to print stiff and soft objects with small features (less than 100 ?m), mechanical uniformity, and build speeds up to 1.8 inches per hour. The 3D printer was equipped with a modular LED light that can be switched between these colors. Although the best build speed is still less than half that of the fastest rate obtained using UV light, it could be further improved by increasing the light intensity or adding other components to the resin, the researchers say. The opaquing agent helps to confine curing to the irradiated areas, which improves the resolution. UV light works much quicker, but its energy requirements – and thus its costs – are significantly higher.