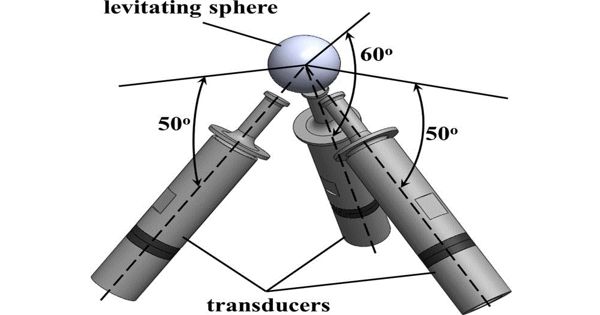 Researchers recently demonstrated the levitation of a polystyrene sphere that is larger than the acoustic wavelength- a world first. When placed in an acoustic field, small objects experience a net force that can be used to levitate the objects in the air. Acoustic levitation is achieved through a unique property of sound that enables objects to remain suspended atop specific pressure regions. In a new study, researchers have experimentally demonstrated the acoustic levitation of a 50-mm (2-inch) solid polystyrene sphere using ultrasound—acoustic waves that are above the frequency of human hearing. The technology could have potential uses in medical applications where there is a great risk of bacterial contamination.

The idea behind Acoustic levitation has been around for many years with demonstrations of small objects being levitated through ultrasonic waves. The demonstration is one of the first times that an object larger than the wavelength of the acoustic wave has been acoustically levitated. Previously, this has been achieved only for a few specific cases, such as wire-like and planar objects. In the new study, the levitated sphere is 3.6 times larger than the 14-mm acoustic wavelength used here.

Researchers have successfully levitated a 50-mm (2-inch) solid polystyrene ball using nothing but high-frequency sound waves. The technology could have potential uses in medical applications where there is a great risk of bacterial contamination.

The researchers, Marco Andrade and Julio Adamowski at the University of São Paulo in Brazil, along with Anne Bernassau at Heriot-Watt University in Edinburgh, UK, have published a paper on the acoustic levitation demonstration in a recent issue of Applied Physics Letters. The experiment marks another milestone in acoustic levitation, but will likely not see use in any levitating vehicles anytime soon.

Acoustic levitation works by using opposing beams of sound waves to create a standing wave. These standing waves have peaks that oscillate between high and low pressure and can be used to bounce and jostle an object up against the force of gravity. “This means that, for a transducer operating at the ultrasonic range (frequency above 20 kHz), the maximum particle size that can be levitated is around 4 mm. In our paper, we demonstrate that we can combine multiple ultrasonic transducers to levitate an object significantly larger than the acoustic wavelength. In our experiment, we could increase the maximum object size from one-quarter of the wavelength to 50 mm, which is approximately 3.6 times the acoustic wavelength.”

As the researchers explain, the angle and number of transducers can be changed, and this does not interfere with the setup’s ability to levitate a large object. The ability to levitate the large sphere occurs because the three transducers produce a standing wave in the space between the transducers and the sphere. In previous methods, small objects are levitated by being trapped at the pressure nodes of the standing wave, but this is not the case here.

“In a typical acoustic levitation device, a small particle can be levitated at the pressure node of a standing wave formed between the transducer and a reflector,” Andrade explained. “Instead of trapping the object at the pressure node, the key to levitating an object larger than the acoustic wavelength is to generate a standing wave between the transducer and the object.”

Although this strategy is based on earlier work, the tripod arrangement used here provides greater 3D stability.

Using the traditional technique, it was thought that the maximum-sized object that could be levitated using ultrasound waves, which have a frequency of about 20 kHz and a wavelength of 14 mm, was around 4 mm in diameter. Using the new method, the researchers demonstrated that the sphere could be levitated to a height of about 7 mm, or approximately half the wavelength of the acoustic waves. But the researchers hope that by tweaking their technique, they’ll be able to get objects higher – and also levitate larger objects at different angles.

“At the moment, we can only levitate the object at a fixed position in space,” Andrade said. “In future work, we would like to develop new devices capable of levitating and manipulating large objects in the air.”

Acoustic levitation has applications for handling and manipulating various materials, such as very hot materials and liquid samples in space. Acoustic levitation could play an important role in the future to analyze and control liquid in space, as well as helping researchers handle extremely hot or caustic materials here on Earth. In microgravity, the lower surface tension allows liquid droplets to reach larger sizes than they do on Earth, and acoustic levitation can be used to control and analyze these large liquid samples.