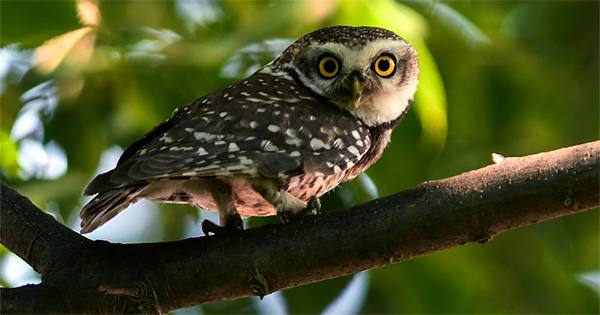 After a 150-year absence, Shelley’s eagle-owl (Bubo Shelley) swooped back into the public eye this week, making its long-awaited comeback in Ghana. The “holy grail” of huge owls has apparently been lurking in the shadows of African rainforests for the last 150 years, despite not properly observed since the 1870s. While this is not to suggest it has not been seen by human eyes since then, this specific encounter is noteworthy since it allowed scientists to undertake impromptu photography with spectacular results.

Despite their size, these birds are highly disguised for arboreal living, making them easy to miss. Thankfully, Dr. Joseph Tobias of Imperial College London’s Department of Life Sciences and freelance ecologist Dr. Robert Williams, who managed to get a suitable profile image, did not miss this specific individual. In a statement, Dr. Tobias remarked, “It was so enormous, at first we believed it was an eagle.” “Fortunately, it was perched on a low branch, and our jaws fell when we lifted our binoculars.” There is no other owl that size in Africa’s rainforests.”

Other than this photograph, the only others known to exist of the species are some hazy shots of a captive bird taken in 1975 at Antwerp Zoo and a “pixelated blob” captured in Congo in 2005 that may or may not be Shelley’s eagle owl.

The immense size of the bird contrasts sharply with the tiny amount of information available about the species. Since its discovery in 1872, there have been a few unconfirmed sightings, as well as occasional reports of people hearing the bird’s call, but this recent sighting will undoubtedly be regarded as a very thrilling sighting among birders.

Dr. Nathaniel Annorbah of Ghana’s University of Environment and Sustainable Development said, “This is a spectacular discovery.” “We’ve been looking for this mystery bird in the western lowlands for years, so finding it here in the Eastern Region’s ridgetop forests is a great surprise.”

Because the bird displayed its distinctive traits, such as distinctive black eyes, a yellow bill, and its large size, the photo was able to prove Shelley’s eagle-owls identify. The species is currently considered vulnerable to extinction, with habitat loss owing to human activities being one of its primary threats. With a population of only a few thousand individuals, environmentalists are hoping that the owl’s recent arrival would spur new efforts to rescue the species. On the subject of large owls, have you heard about Gladys, the Minnesota Zoo’s escaped Eurasian eagle owl?