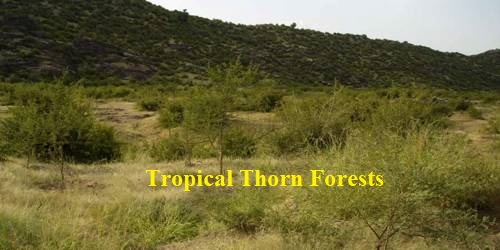 The Thorn Forests are found in the semi-arid areas of Gujarat, Rajasthan, Madhya Pradesh, Chhattisgarh, Uttar Pradesh, and Haryana. Tropical thorn forests occur in the areas which receive rainfall less than 50 cm. These forests occur in the areas where annual rainfall is between 20 to 70 cm, the dry season is hot and very long. They are found in South Punjab, most of Rajasthan, and part of Gujarat. These consist of a variety of grasses and shrubs. It includes semi-arid areas of south-west Punjab, Haryana, Rajasthan, Gujarat, Madhya Pradesh, and Uttar Pradesh.

Thorn Forest is a type of desert formation which has scrub-like vegetation. In these forests, plants remain leafless for the most part of the year and give an expression of scrub vegetation. Acacias, palms, euphorbias, and cacti are the main plant species. Important species found are babool, ber, and wild date palm, khair, neem, kheiri, palm, etc. Tussocky grass grows up to a height of 2 m as the undergrowth. They are mostly tropical and subtropical forests having trees and plants with armed thorns and spines. The forests remain leafless for the most part of the year and are sometimes called thorn scrub or scrub jungles. Trees are scattered and have long roots penetrating deep into the soil in order to get moisture. Leaves are modified into spines (thorns) and are small to minimize transpiration. The vegetation found here is often short and small with few tall trees set against the sparse ground where grass lacks. 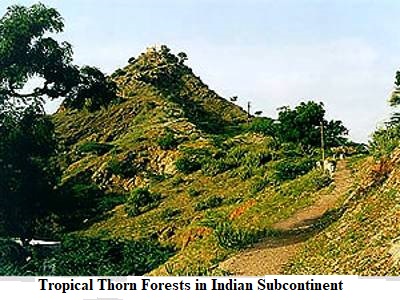 A thorn forest is dense, scrub like vegetation characteristic of dry subtropical and warm temperate areas with a seasonal rainfall averaging. The plants and trees found across the Thorn forests are adapted to the semi-arid and arid nature of the land. This vegetation covers a large part of southwestern North America and southwestern Africa and smaller areas in Africa, South America, and Australia. The vegetation is adapted to the hot temperatures and harsh climatic conditions. Trees typically do not exceed in height, usually averaging between tall.