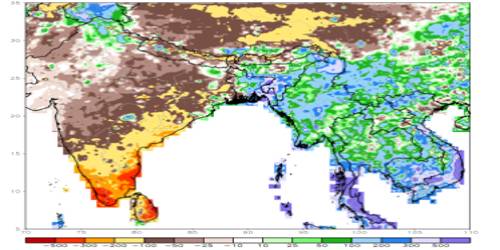 You know that change is the law of nature. Climate has also witnessed a change in the past at the global as well as at local levels. It is changing even now but the change is imperceptible. The average annual temperatures across the country could rise by 2 degree Celsius by the middle of the century and 3.5 degrees by its end. The present carbon dioxide concentration has not been exceeded during the past 420,000 years and likely not during the past 20 million years. The rate of increase is unprecedented during at least the past 20,000 years.

The temperature of the world is significantly increasing. Carbon dioxide produced by human activities is a major source of concern. This gas, released to the atmosphere in large quantities by burning of fossil fuel, is increasing gradually. Other gases like methane, chlorofluorocarbons, and nitrous oxide which are present in much smaller concentrations in the atmosphere, together with carbon dioxide are known as greenhouse gases. These gases are better absorbers of longwave radiations than carbon dioxide, and so on, are more effective at enhancing the greenhouse effect. These gases have been contributing to global warming. It is said that due to global warming the polar ice caps and mountain glaciers would melt and the amount of water in the oceans would increase.

The mean annual surface temperature of the earth in the past 150 years has increased. It is projected that by the year 2,100, global temperature will warm about 2°C. This rise in temperature will accompany many other changes: one of these is a rise in sea level, as glacier and sea ice melt in response to warming. According to the current prediction, on an average, the sea level will rise 48 cm by the end of the twenty-first century. This would increase the incidence of annual flooding. The climatic change would promote insect-borne diseases like malaria, and lead to shifting in climatic boundaries, making some regions wetter and others drier. An agricultural pattern would shift and human population, as well as the ecosystem, would experience change. What would happen to the Indian sea coasts if the sea level rises 50 cm above the present one? Climate change will cause declines in groundwater levels, and rising sea levels will salinate freshwater sources.