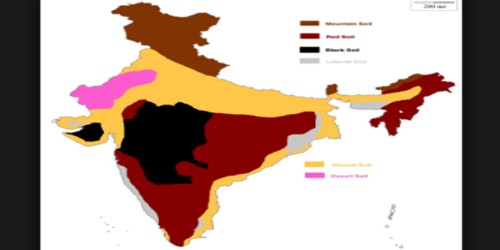 The black soils are also called regur and black cotton soils because cotton is the most important crop grown on these soils. This soil covers most of the Deccan Plateau which includes parts of Maharashtra, Madhya Pradesh, Gujarat, Andhra Pradesh and some parts of Tamil Nadu. In the upper reaches of the Godavari and the Krishna, and the northwestern part of the Deccan Plateau, the black soil is very deep. These soils are also known as the ‘Regur Soil’ or the ‘Black Cotton Soil’. The black soils are generally clayey, deep, and impermeable. They swell and become sticky when wet and shrink when dried. So, during the dry season, these soils develop wide cracks. Thus, there occurs a kind of ‘self ploughing’. Because of this character of slow absorption and loss of moisture, the black soil retains the moisture for a very long time, which helps the crops, especially; the rainfed ones, to sustain even during the dry season. 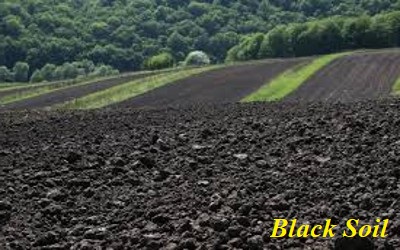 The black soil is very retentive of moisture. It swells greatly and becomes sticky when wet in the rainy season. Under such conditions, it is almost impossible to work on such soil because the plow gets stuck in the mud. Chemically, the black soils are rich in lime, iron, magnesia, and alumina. They also contain potash. But they lack in phosphorous, nitrogen and organic matter. The color of the soil ranges from deep black to grey.