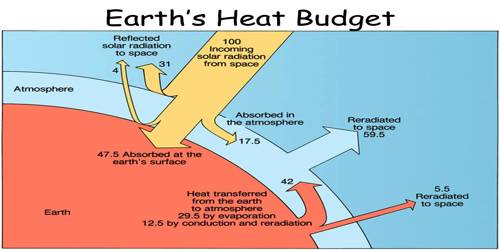 Heat budget of the Planet Earth

A heat budget is a perfect balance between incoming heat absorbed by the earth and outgoing heat escaping it in the form of radiation. The figure depicts the heat budget of the planet earth. The earth is a whole does not accumulate or lose heat. It maintains its temperature. This can happen only if the amount of heat received in the form of insolation equals the amount lost by the earth through terrestrial radiation. 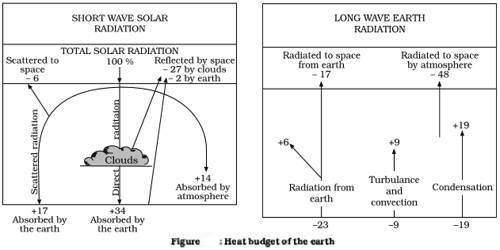 Consider that the insolation received at the top of the atmosphere is 100 percent. While passing through the atmosphere some amount of energy is reflected, scattered and absorbed. Only the remaining part reaches the earth surface. Roughly 35 units are reflected back to space even before reaching the earth’s surface. Of these, 27 units are reflected back from the top of the clouds and 2 units from the snow and ice-covered areas of the earth. The reflected amount of radiation is called the albedo of the earth.