Home Geology What is the Sole Driving Force behind all the Exogenic Processes? 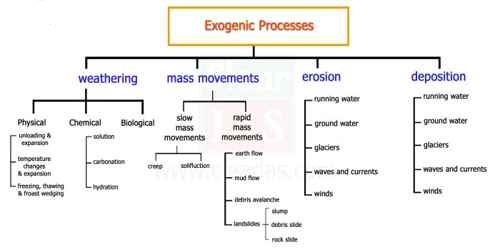 Sole Driving Force behind all the Exogenic Processes

Climatic factors being equal, the intensity of action of exogenic geomorphic processes depends upon the type and structure of rocks. The term structure includes such aspects of rocks as folds, faults, orientation, and inclination of beds, presence or absence of joints, bedding planes, hardness or softness of constituent minerals, the chemical susceptibility of mineral constituents; the permeability or impermeability, etc. Different types of rocks with differences in their structure offer varying resistances to various geomorphic processes. A particular rock may be resistant to one process and non-resistant to another. And, under varying climatic conditions, particular rocks may exhibit different degrees of resistance to geomorphic processes and hence they operate at differential rates and give rise to differences in topography. The effects of most of the exogenic geomorphic processes are small and slow and maybe imperceptible in a short time span, but will, in the long run, affect the rocks severely due to continued fatigue.

Finally, it boils down to one fact that the differences on the surface of the earth through originally related to the crustal evolution continue to exist in some form or the other due to differences in the type and structure of earth materials, differences in geomorphic processes, and in their rates of operation.

Note: A process is a force applied on earth materials affecting the same. An agent is a mobile medium (like running water, moving ice, winds, waves, etc) which removes, transport, and deposits earth materials.