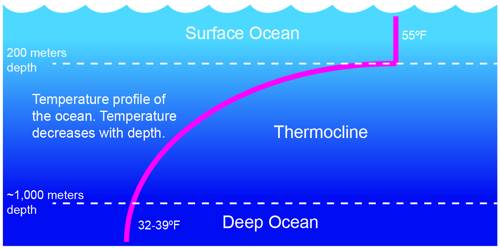 A thermocline is a lean but separate layer in a large body of fluid (e.g. water, such as an ocean or lake, or air, such as an atmosphere) in which warmth changes further quickly with depth than it does in the layers above or below. It is the change sheet between warmer mixed water at the ocean’s exterior and cooler deep water below. In the ocean, the thermocline divides the upper mixed layer from the calm deep water below. Depending largely on season, latitude and turbulent mixing by wind, thermoclines might be a semi-permanent characteristic of the body of water in which they happen, or they might shape momentarily in reaction to phenomena such as the radioactive heating/cooling of surface water during the day/night.