Home Other Democracy and Autocracy 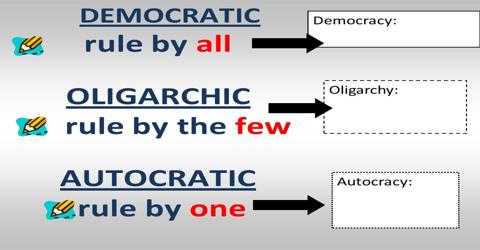 Democracy is a system of a government in which all the people of a state or polity are involved in making decisions about its affairs, typically by voting to elect representatives to a parliament or similar assembly. Democracy may be defined as the government by the people; especially; a government in which the supreme power is vested in the people and exercised directly or indirectly through a system of representation usually involving periodically held tree elections. Democracy consists of some key elements: It is a political system for choosing and replacing the government through tree and fair elections. Democracy contrasts with forms of government where power is either held by an individual, or in an absolute monarchy, or where power is held by a small number of individuals, as in an absolute Oligarchy. On the contrary, an autocracy is a system of government in which supreme power is concentrated in neither the hands of one person, whose decisions are subject to neither external legal restraints nor regularized mechanisms of popular control.

An Autocracy is an absolute monarchy or dictatorship. Autocracy is a form of government in which the political power is held by a single self-appointed ruler who holds all the political power. Actually, the word ‘autocracy’ is the opposite of ‘democracy’, which comes from the Greek words: ‘autos’ meaning ‘self’ and ‘kratos’ meaning ‘power’. In an autocratic government, one person or group holds all the power, without the participation, or sometimes even without the consent of the people. However, democracy as well as autocracy is the most important components of any state through which two systems may develop if these are governed in a proper manner.