Home Other How to Give the Best Hug, According To Science 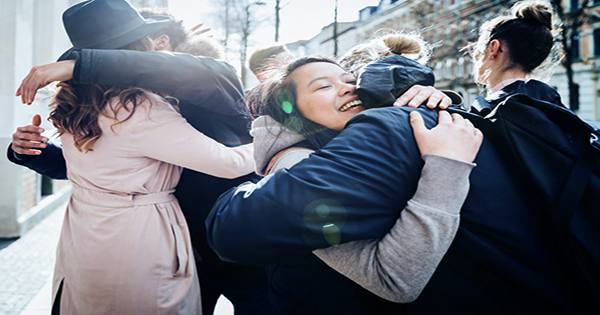 Hugging is one of the first ways we learn to communicate, but the intricacies of interaction increase with us. Is it one arm above, one arm under, or both arms above the shoulders for the taller person? Should it be brief and to the point? Alternatively, should it be lengthy and gentle? How do these features differ between hugs between friends and embraces between strangers? It is the logistical nightmares of introverts, but happily, science is on ready to help. Researchers delved into the ins and outs of hugging it out in a two-part study to discover whether there was a recipe for the ideal embrace (a balm for anyone suffering from skin hunger). The crossing arm arrangement (one arm under, one arm over) was shown to be the most pleasurable, with a 5- to 10-second duration being the most enjoyable.

The researchers employed two ways to arrive at their findings, which were reported in Acta Psychologica. The first enlisted the help of 45 female college students, who were blindfolded and embraced by a female researcher. To test how the blindfolded volunteers responded, the researcher hugged them for 1, 5, and 10 seconds, rotating between crisscross and neck-waist (one person’s arms above the others).

The shortest hugs were found to be the least pleasurable across the board, whereas 5- to 10-second embraces rated equally pleasurable. Hugging manner, on the other hand, appeared to have no effect on the hug’s enjoyment factor.

The researchers recognize that lab surroundings are not ideal for a huge hug-off, and they acknowledge that the repeated nature of the study may have influenced the satisfaction ratings of short and prolonged embraces.

Because each candidate received six hugs in total, it is conceivable that lengthier hugs were less socially uncomfortable than they may have been “in the wild,” as the huggees were accustomed to embrace by a stranger while blindfolded.

Part two of the study proceeded to the streets (or, more accurately, a college campus), where 100 pairs of students who were already mingling were instructed to squeeze each other. The researchers did not make any recommendations on which hug type to use, but they did record their style, proximity, height, and gender for study. The crisscross embrace was the most common among all participants, but it was most popular among men, accounting for 66 percent and 82 percent of hugs, respectively. The favored configuration appears to be unaffected by personal proximity.

Most of the participants were about the same height, which might explain why crisscross hugs were preferred over neck-waist embraces, which might be more suited for vertically mismatched pairings. It is also likely that some people save this embrace for occasions that are more romantic. “We talked to people when we completed the second research,” said Goldsmiths psychologist and first author Anna Düren of the University of London to Science. “‘Oh sure, the neck-waist seems a little more personal,’ they’d often comment.”

Some features of a friendly embrace were not investigated, such as how individuals felt about hugs that lasted longer than 10 seconds or how firmly (or not) one should squeeze the hug receiver, the two studies do, however, provide some valuable advice. Therefore, the next time you presented with a hug, keep these tips in mind: one arm over, one arm under, no fewer than 5 seconds, no more than 10. Is not it simple?