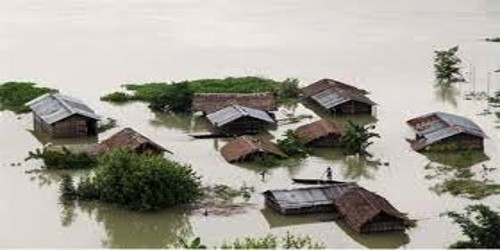 You read in newspapers and watch images of floods on televisions occurring in some regions during rainy seasons. Inundation of land and human settlements by the rise of water in the channels and its spill-over presents the condition of flooding. Unlike other natural disasters, the causes of floods are well-established. Floods are relatively slow in occurrences and often, occur in well-identified regions and within the expected time in a year.

Floods occur commonly when water in the form of surface run-off exceeds the carrying capacity of the river channels and streams and flows into the neighboring low-lying floodplains. At times, this even goes beyond the capacity of lakes and other inland water bodies in which they flow. Floods can also be caused due to a storm surge (in the coastal areas), high-intensity rainfall for a considerably longer time period, melting of ice and snow, reduction in the infiltration rate and presence of eroded material in the water due to a higher rate of soil erosion. Though floods occur frequently over a wide geographical area having disastrous ramifications in many parts of the world, floods in the South, Southeast, and East Asian countries, particularly in China. India and Bangladesh are frequent and equally disastrous. 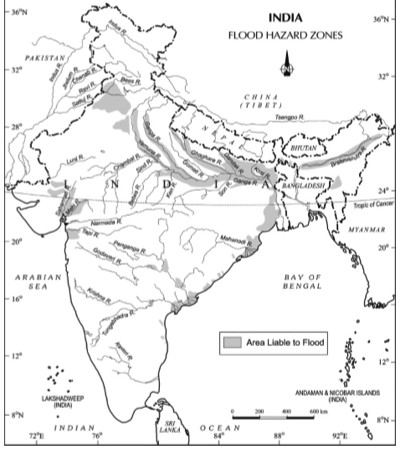 Various states of India face a heavy loss of lives and property due to recurrent floods. The Figure shows the flood-affected areas in India. Assam. West Bengal and Bihar are among the high flood-prone states of India. Apart from these, most of the rivers in the northern states like Punjab and Uttar Pradesh are also vulnerable to occasional floods. It has been noticed that states like Rajasthan, Gujarat, Haryana, and Punjab are also getting inundated in recent decades due to flash floods. This is partly because of the pattern of the monsoon and partly because of blocking of most of the streams and river channels by human activities. Sometimes, Tamil Nadu experiences flooding during November-January due to the retreating monsoon.