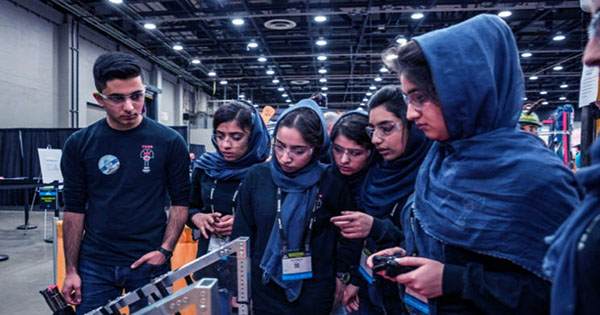 Three days ago, IFLScience reported to a bright all-girl robotics team from Afghanistan who was begging to flee their country and move to Canada, as they faced an uncertain future under the new control of the Taliban government.

Now, reports are coming in that half of the team has successfully fled the country and arrived in Qatar, hoping for a brighter future and the ability to continue innovating. A statement from the Digital Citizen Fund (DCF) and the Qatari Foreign Ministry said, “Several members of the Afghan women’s robotics team have arrived safely from Kabul, Doha, Qatar.”

Consisting of 20 girls aged 18 and under, the team was highly acclaimed for making low-cost ventilators from old car parts to help with the ongoing Covid-19 pandemic epidemic. In 2017, the team was briefly banned from entering the United States but won silver in the First Global Challenge in Washington DC. After the Taliban took over, the girls feared for their future and safety in the STEM fields.

Despite claims that the new government will allow women to work and be educated up to the university level, many are concerned about the rights of working women in the country, including key human rights lawyer Kimberley Motley, who is fighting for the rights of the robotics team. Leave the country. The remaining members are still in Afghanistan, with Qatar and DCF reportedly arranging transportation for them outside the country soon. Some members of the Afghan robotics team, which has made headlines as a symbol of a more progressive Afghanistan in recent years, have fled the country since the Taliban took over.

Members of the Afghan Dreamers team left Kabul on a commercial flight on Tuesday and are now in Qatar, according to Afghan technology entrepreneur Roya Mahboob, who started the Afghan Girls Robotics team in 2017. Mahboob heads the Digital Citizen Fund, which runs classes for STEM and robotics girls. In a statement from The New York Times, Mahboob said, “The Taliban will give girls the opportunity to be educated under Shariah law.

“We have to wait and see what that means. Clearly, we hope that women and girls will be allowed to pursue dreams and opportunities under the Taliban, because that is what is best for Afghanistan and indeed the world.”

Investors share how infrastructure as code is taking over DevOps