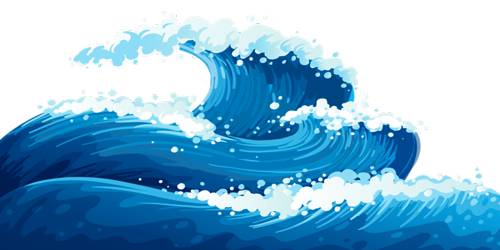 Waves are most commonly caused by wind. Waves are actually the energy, not the water as such, which moves across the ocean surface. Water particles only travel in a small circle as a wave passes. Wind provides energy to the waves. Wind causes waves to travel in the ocean and the energy is released on shorelines. The motion of the surface water seldom affects the stagnant deep bottom water of the oceans. As a wave approaches the beach, it slows down. This is due to the friction occurring between the dynamic water and the sea floor. And, when the depth of water is less than half the wavelength of the wave, the wave breaks. The largest waves are found in the open oceans. Waves continue to grow larger as they move and absorb energy from the wind.

Most of the waves are caused by the wind driving against water. When a breeze of two knots or fewer blows over calm water, small ripples form and grow as the wind speed increases until white caps appear in the breaking waves. Waves may travel thousands of km before rolling ashore, breaking, and dissolving as surf. 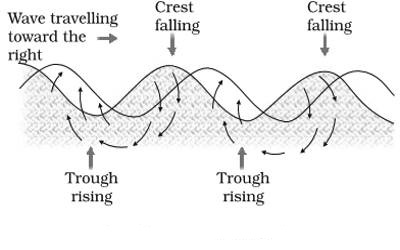 A wave’s size and shape reveal its origin. Steep waves are fairly young ones and are probably formed by local wind. Slow and steady waves originate from faraway places, possibly from another hemisphere. The maximum wave height is determined by the strength of the wind, i.e. how long it blows and the area over which it blows in a single direction.

Waves travel because wind pushes the water body in its course while gravity pulls the crests of the waves downward. The falling water pushes the former troughs upward, and the wave moves to a new position (Figure). The actual motion of the water beneath the waves is circular. It indicates that things are carried up and forward as the wave approaches, and down and back as it passes.