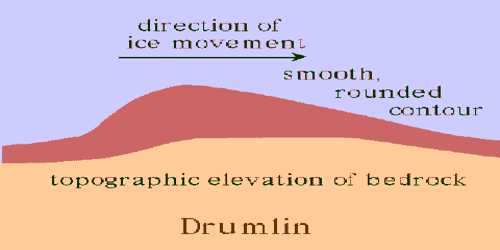 Drumlins are smooth oval shaped ridge-like features composed mainly of glacial till with some masses of gravel and sand. The long axes of drumlins are parallel to the direction of ice movement. They may measure up to 1 km in length and 30 m or so in height. One end of the drumlins facing the glacier called the stoss end is blunter and steeper than the other end called the tail. They are commonly found in clusters numbering in the thousands.

Drumlins occur in various shapes and sizes, including symmetric (about the long axis), spindle, parabolic, and transversely asymmetric forms; their long axis is parallel to the direction of ice movement at the time of formation. It usually comprises layers constituting till, sand and gravel in various proportions – indicating that material was repeatedly added to a core, which may be of rock or glacial till. The dilatancy of glacial till was invoked as a major factor in drumlin formation. 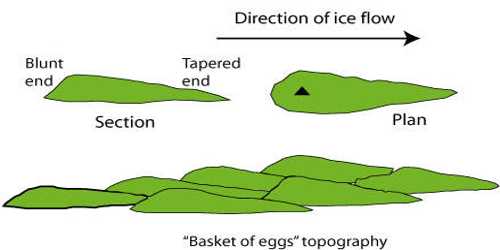 The drumlins form due to the dumping of rock debris beneath heavily loaded ice through fissures in the glacier. The stoss end gets blunted due to pushing by moving ice. Drumlins give an indication of the direction of glacier movement. There is still some debate about how drumlins are formed, but the most widely accepted idea is that they were formed when the ice became overloaded with sediment. When the competence of the glacier was reduced, the material was deposited, in the same way, that a river overloaded with sediment deposits the excess material.