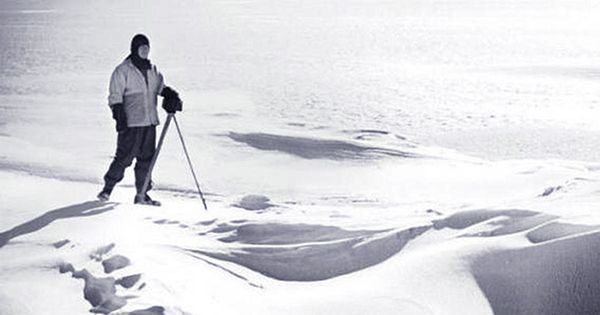 The group of six set up base camp at a small meteorological station in Dove Bay and kept a supply depot on the route they would take in the autumn and winter before leaving in the spring for land and snow. Brønlund, as an expert interpreter, kept a travel diary for the group.

The Danish expedition set out to map the last unregistered territories of Greenland, in 1906. This last section of the map remains unrefined for a reason: the conditions in the far northeast were harsh, and to try it you had to rely on your own food for sustenance.

They traveled north on the ice coast and once faced harsh conditions and rough ice, made their already difficult journey even tougher, as they had to stop regularly to repair the sleds, in March.  The mistake was probably made by sketches drawn by previous explorers Robert Peary, who did it by conjecture. The team became concerned when they realized that the coastline was moving northeast beyond their expectations, so the trip would take longer than they had planned – and, probably, use more resources.

Yet committed to their activities, the team splits into two, with one team crossing the sea ice to the northwest, where they will map the coast and eventually return to safety. The other, Ludwig Mylius– Erichsen, made up of Neil Peter Høeg Hagen and Brønlund, headed west and would eventually end their journey on the ice. The three, led by Mylius-Erichsen, continued to map the region as they lost valuable time and energy as they entered a Forward, which would later become known as Hagen Fitzgerald, the cartographer with this navigation map.  They finished the work of filling in the map and went back to the way they had come, but they found that the summer had melted the ice, making their former route inaccessible and forcing them to go inside.

Their situation became dire. The weather got colder, they had four dogs down and only one sled, and their shoes were strewn with stones under their feet. Brønlund wrote in his diary, “No food, no footwear, and not hundreds of miles away from the ship.” “Our prospects are really bad.”

They stopped eating the dog as they needed to get back on the ship, but as soon as they reached the ice the dog was forgotten like the crew. They made a final bid for survival and made it an impressive 260 kilometers (160 miles) on bare, frozen feet making it all the way in the winter darkness of Greenland, where only daylight lasts only three or four hours. Yet it wasn’t enough.

Jørgen Brønlund wrote in his final entry, aware he would not survive the night. “I come under a waning moon, and cannot go on because of my frozen feet and the darkness, “I died at 79 degrees N. lat, in November on the return journey through the inner ice.” “I came under a waning moon and couldn’t walk because of my icy feet and darkness. Another’s body was in the middle of the fjord. Hein died on November 15, about ten days after Mylius Erichsen.” His only body was found and with him, the party began their journey. All three died, but their maps – and the purpose of their trip – were complete. When Brønlund was recovered four months later, his diary was seen recording his last days.

Within the last entry, there was a black spot on the final page, just below his signature, which a team from the University Of Southern Denmark (SDU) has now put into a chemical analysis. An analysis published in the journal Archeology found that the black spots contained burnt rubber, oil, petroleum, and feces. As the team’s last survivor, Brønlund arrived at the last depot and used the Lux Petroleum Burner, Match, and Petroleum. The team believes he tried to use oils available to him, possibly vegetables, animals, fish, or candles, to try to get to the burner without any flammable alcohol.

Professor Kaare Lund Rasmussen of SDU said, “I see for myself how weak and weak he was, shaking hands, failing to burn the burner”, “But failed.” Exhausted, Brønlund wrapped himself in his fur and died. His diary is now kept in the Royal Library in Copenhagen, and Lux burner, found in 1973, donated it to the Art Institute in Copenhagen.