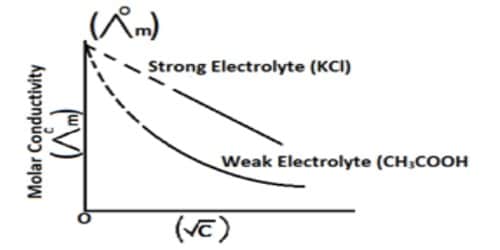 On increasing the dilution the average distance between ions increases and, therefore, the retarding force decreases and there is an increase in Λm with an increase in dilution. The above explanation, which is only a fragmentary reflection of a more detailed picture, leads to a relation between molar conductance and concentration of the same form as Kohlrausch’s equation. Coulombic interactions between ions in solution are relatively strong, long-range forces compared to the other types of intermolecular force in solution.

Debye, Huckel, and Onsager’s theory were able to calculate the constant A and B for many electrolytes in dilute solution. The calculated values were found to be in agreement with the values found from the slopes of the experimental data plotted as Am vs √C. The theory is based around the simple fact that oppositely charged ions attract one another, whilst like-charged ions repel each other. 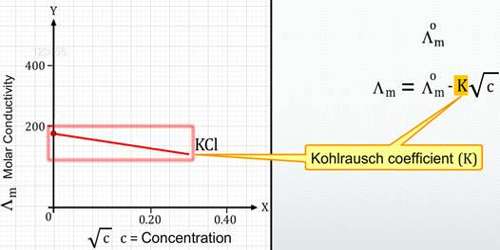 The theory which explains many other facts, however, fails when applied to solutions of a moderate or higher concentration, i.e., 0.1 to 1 mol L-1 and above. Although no satisfactory theoretical treatment for such solutions is still available, mention may be made of the concept of the formation of ion-pairs or ions triples, primarily by Fuoss, Bjerrum, and others. As a consequence, the motion of ions in solution is not totally random; there is a small propensity for ions of opposite charge to encounter each other more regularly than ions of a similar charge.

Because of the proximity of the ions at high concentrations, there may be a specific attraction between the oppositely charged ions so that two oppositely charged ions in an ion -pair will virtually behave like an undissociated molecule so far as conductance is concerned. A time-averaged picture of the solution shows that near any given ion, there is an excess of counter-ions. The ion pairs cannot be regarded as molecules as these can exchange partners. The concept of ion-pair is of importance particularly in solutions of low dielectric constant. The Debye–Hückel limiting law enables one to find out the activity coefficient of an ion in a dilute solution of known ionic strength. This time-averaged spherical distribution has a net charge equal in magnitude but opposite in sign to the central ion and is known as its ionic atmosphere.