A bar magnet is placed on a plain sheet of a paper. A compass needle is placed near the north pole of the magnet. The north and south poles of the compass are marked by pencil dots. The compass needle is shifted and placed so that its south pole touches the pencil dot marked for the north pole. The process is repeated and a series of dots are obtained. The dots are joined by a smooth curve. This curve is a magnetic line of force. Even though few lines are drawn around a bar magnet the magnetic lines exist in all space around the magnet.

The magnet placed with its north pole facing geographic north 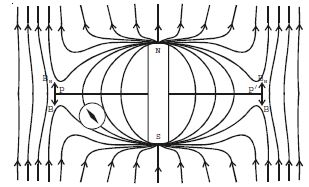 Hence, neutral points are defined as the points where the resultant magnetic field due to the magnet and Earth is zero.

Hence, at neutral points: B = Bh

Experiment: Preparation of an Artificial Magnet by Electric Method