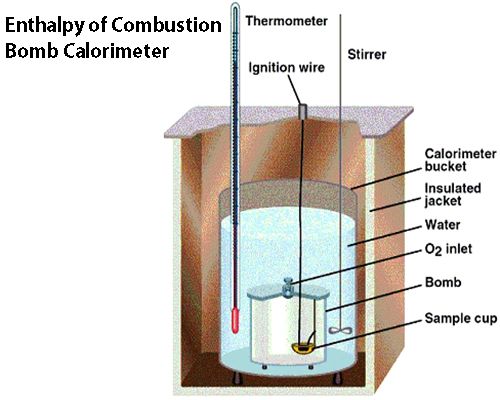 The standard enthalpy of combustion of a compound or an element is defined as the heat evolved when one mole of the substance is burnt completely in oxygen at 25° C temperature and 1-atmosphere pressure. Let consider the following reaction:

This means that when 1 mole of methane is burnt completely in oxygen to form gaseous carbon dioxide and liquid water at 298 K and 1-atmosphere pressure 890.3 kJ of heat is evolved. Enthalpies of combustion of substances are usually measured in Berthelot’s Bomb calorimeter. The apparatus is shown in Figure.

It consists of a strong vessel, B, called the bomb, fitted with a lid which can be screwed on to the bomb. The vessel is made of steel, nickelled or the outside and the inside is coated with some non-oxidizable material such as platinum, gold or enamel. Through the lid that is an inlet tube and valve, through which oxygen can be introduced. The bomb is placed in a bucket which contains a known quantity of water. The temperature of the water is recorded with a sensitive thermometer, T, the stirrer, S, renders the temperature of the water uniform. The bucket, in turn, is surrounded by an insulating air space, A, and the whole thing is placed in a metallic container with an inner lining of some heat insulating material, such as felt or cotton.

The arrangement is such that two pieces of insulated platinum wire can pass right through the outer cover into the bomb. Before assembling the apparatus a weighed quantity of the substance is placed in the cup, Q. The sample is placed in contact with a spiral of thin iron wire which is connected to the platinum wires. If the sample is solid it is compressed into a cylindrical shape before being placed in Q; if liquid, it is placed in a platinum capsule. Oxygen is introduced into the bomb through the tube on the lid and when the pressure inside is about 25 atmosphere the valve screw is tightened. This is then placed in the bucket, B. The temperature of the water is noted, and electric current is passed through the platinum wires. The spiral of iron wire burns out and the heat ignites the sample which bums completely in oxygen. From the rise in temperature of the water and the heat capacity of the instruments, i.e., the bucket, thermometer, stirrer, the bomb etc., the quantity of heat evolved may be calculated. The heat of combustion is then obtained, after giving due allowance to the heat developed by the burning of iron wire. In practice, the heat capacity of the components of the instruments is determined by burning in the same calorimeter a known quantity of a substance whose heat of combustion is accurately known.