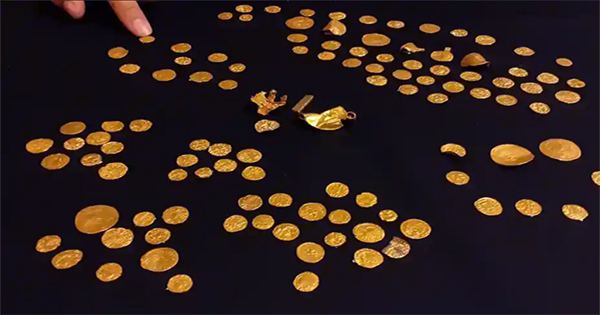 If Harrison Ford’s portrayal as Indiana Jones, the movie hero of the ages, has taught us anything, it is, that treasure-seeking is a feasible – even profitable – career option.

As if to demonstrate this argument, a metal detectorist in the East of England uncovered the world’s biggest collection of Anglo-Saxon gold coins: 131 gold coins, largely Frankish tremisses, dating back 1,400 years before the country of “England” existed. Moreover, yes, this is considered a hidden treasure in the United Kingdom.

Unlike your normal Indiana Jones adventure, though, this find took time and patient – the gold coins discovered in a field in West Norfolk after six years of diligent metal detecting.

Experts believe the coins used as bullion – that is, valued by weight rather than denomination – since the trove also comprises four other gold objects: three pieces of jewelry and a gold bar (something, which is a lot more feasible across borders when the coins are literally solid gold rather than a cotton-linen blend).

“Researching the treasure and its discovery site might help us learn more about early commerce and exchange systems, as well as the importance of west Norfolk to East Anglia’s governing rulers in the seventh century.”

However, the coins bring with them a host of legal tangles and intrigue. While one anonymous detectorist -let’s call them King’s Lynn Jones – uncovered virtually all of the coins, someone else discovered ten. In 2017, David Cockle was a serving police officer when he was sentenced for attempting to sell the coins he discovered without disclosing them, an act that theoretically amounts to theft from the Queen due to the UK’s peculiar and esoteric nature.

This type of hoard has been discovered all across the British Isles, with the most well-known example being the incredible ship burial at Sutton Hoo. Archeologists think Sutton Hoo, which dates from around the same time and is located in the nearby county of Suffolk, was the final resting place of someone of great importance in the Anglo-Saxon culture.

The location yielded a plethora of gold artifacts, but just 37 gold coins – a pittance in compared to the Norfolk treasure. Although 131 coins is an incredible figure, there is a bittersweet undercurrent in knowing that it might have been far more. Two of the coins sold unlawfully in 2017 never recovered, having traded into the antiquities market. The find “shows how susceptible these artifacts are to unscrupulous collectors and the antiquities trade,” said Helen Geake, Finds Liaison Officer for Norfolk, while she also emphasized “the relevance of metal-detected evidence in helping recreate the early history of England.”

Now for the most magnificent statement, we have ever had to write if the finding is formally certified Treasure, the Crown will very certainly claim it on behalf of Norwich Castle Museum. The West Norfolk find, according to Gareth Williams, Curator of Early Medieval Coins at the British Museum, is “hugely important,” and the coins will “help to revolutionize our knowledge of the economics of early Anglo-Saxon England.” “It’s similar in the period to the renowned ship burial from Sutton Hoo in Suffolk,” Williams continued, “and while it doesn’t include as much gold as the Sutton Hoo burial as a whole, it does contain many more coins.” “In reality, it is the world’s greatest coin hoard of the time.”