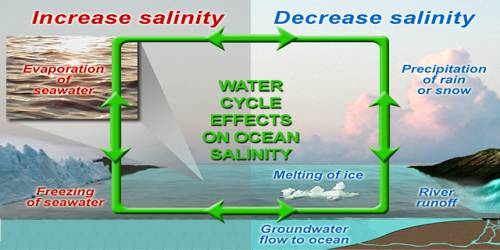 All waters in nature, whether rainwater or ocean water, contain dissolved mineral salts. Salinity is the term used to define the total content of dissolved salts in seawater (Table). It is calculated as the amount of salt (in gm) dissolved in 1,000 gm (1 kg) of seawater. It is usually expressed as parts per thousand. Salinity is an important property of sea water. The salinity of 24.7 percent has been considered as the upper limit to demarcate ‘brackish water’. 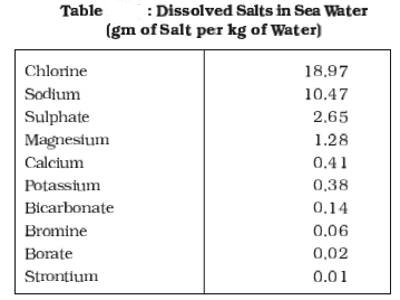 There are many chemicals in seawater that make it salty. Most of them get there from rivers carrying chemicals dissolved out of rock and soil. The main one is sodium chloride, often just called salt. Most seawater has about 35g (7 teaspoons) of salt in every 1000g of water.

(i) The salinity of water in the surface layer of oceans depends mainly on evaporation and precipitation.

(ii) Surface salinity is greatly influenced in coastal regions by the freshwater flow from rivers, and in Polar Regions by the processes of freezing and thawing of ice.

(iii) Wind also influences salinity of an area by transferring water to other areas.

(iv) The ocean currents contribute to the salinity variations. Salinity, temperature, and density of water are interrelated. Hence, any change in the temperature or density influences the salinity of an area.