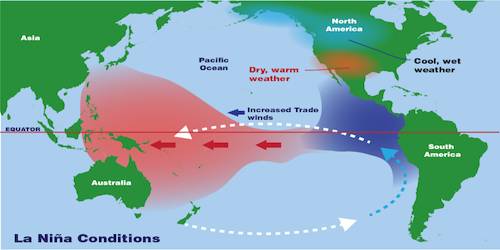 La Nina Condition is opposite of El Nino Condition. In a La Nina, the tropical Pacific trade winds become very strong and an abnormal accumulation of cold water occurs in the central and eastern Pacific Ocean. The name La Niña originates from Spanish, meaning “the little girl”, analogous to El Niño meaning “the little boy”. 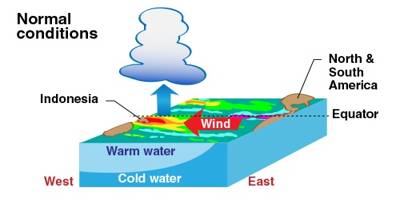 Strong La Niña circumstances throughout December 1998 are shown in the top panel. The Eastern Pacific is cooler than usual and uncommonly cool water extends beyond westward than is common. The cooling of this region of water close to the equator, which normally unfolds throughout late fall into untimely winter, yields impacts around the globe. In the United States, a La Niña winter means more rain in the Pacific Northwest, short periods of below-average temperatures in the Northeast and usually dry and mild situation for the southern tier.