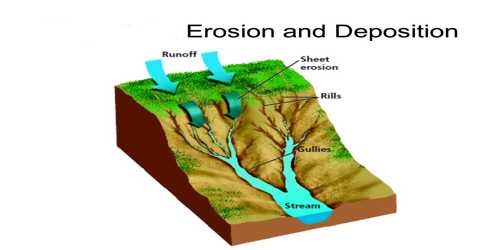 Deposition is a consequence of erosion. It is the process by which sediment settles out of the water or wind that is carrying it and is deposited in a new location. The erosional agents lose their velocity and hence energy on gentler slopes and the materials carried by them start to settle themselves. In other words, deposition is not actually the work of any agent. The coarser materials get deposited first and finer ones later. By deposition, depressions get filled up. The same erosional agents viz., running water, glaciers, wind, waves and groundwater act as aggradational or depositional agents also. Deposition occurs when the eroded materials finally settle down into a new location and frequently over time, forms a new sedimentary rock. For example, when a river loses some of its carrying power, as when its gradient or discharge diminishes. Glacial deposits might mark the site where the great ice body began retreating or where winds carried and distributed glacial sediment well away from the snout of the glacier.