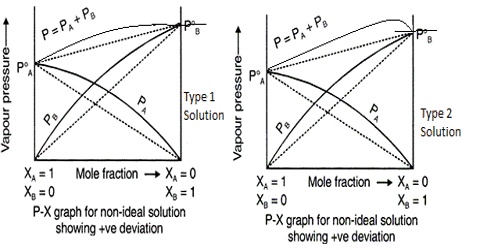 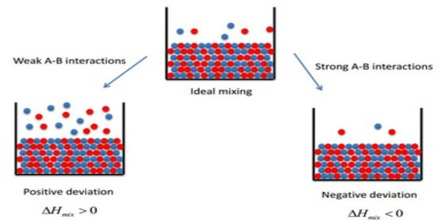 (b) If the molecules of the solvent and the solute attract each other more strongly than molecules of their own kind, more energy can be released when the solute and solvent molecules an brought together than was required to separate them. Under these circumstances the overall solution process can result in the evolution of heat and the mixing will be exothermic. When acetone and water are mixed heat is evolved and the container in which the mixing is done becomes warm.

(c) When the salute – Solvent molecular interaction is weaker than those between pure solvent molecules and pure solute molecules the formation of a solution requires addition of energy. This is became more energy is required to separate the molecules in the solute and solvent that is evolved when these molecules are mixed. In such cases the solution becomes cool as it is formed, indicating that the process is endothermic. Solution of ethanol and hexane is an example. The non- polar hexane molecules come between ethanol molecules effectively destroying the hydrogen bond between ethanol molecules. This absorbs energy and the solution is cool.

Liquid – liquid solution of the types described in (b) and (c) are non-ideal as these do not obey Raoult’s law.

Colligative Properties from Association in Solution