The noble gases are isolated from air by removing oxygen and nitrogen from air free from carbon-di-oxide, water vapor, dust particles, etc. These are chemical elements that are not reactive. This can be accomplished by either chemical methods or physical methods. In the chemical method, the unwanted gases are removed by means of the compound formation while in the physical method, these are removed by the fractional evaporation of liquid air. They are characterized by having stable electronic configurations and generally exist as monatomic gaseous substances.

The first step in this method is to isolate the noble gases mixed together, from the atmosphere by passing repeated electric sparks in air so as to remove nitrogen and oxygen as nitrogen dioxide (N2 + 2O2→ 2NO2 ). The second step is to separate the various constituents from one another taking advantage of the fact that they can be adsorbed on activated charcoal at different temperatures.

Ramsay – Raleigh’s method:- Removal of oxygen and nitrogen of the atmosphere as Nitrogen dioxide:

A mixture of air and oxygen is constantly admitted into a glass globe of about 50 liters capacity. Two platinum electrodes are introduced and discharge from a transformer of about 6000 – 8000 volts is passed by the action of which nitrogen and oxygen rapidly combine to form oxides of nitrogen. The oxides are dissolved out in a solution of sodium hydroxide continuously circulated through the flask.

Oxygen if any is removed by introducing alkaline pyrogallol in the globe. 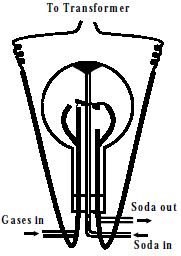 The gaseous mixture is passed into a double-walled bulb containing coconut charcoal. The mixture is retained in the bulb for about an hour. During this period the gases argon, krypton, and xenon get adsorbed while the helium and neon remain unadsorbed and are pumped out.

The noble gases (except helium) were discovered by Rayleigh and Ramsay in the late 19th century. They found that a sample of pure nitrogen which they had collected from a chemical reaction had a different density from a sample of normal air.

Effect of Pressure on Solubility

How Chlorine can be identified in Organic Compound?