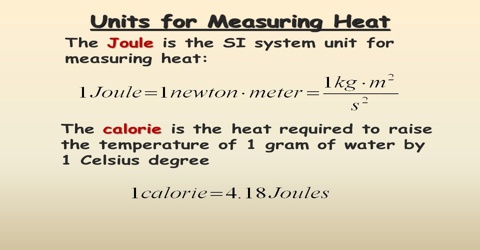 Unit of heat: The unit of heat is the caloric. A calorie is defined as the quantity of heat required to raise the temperature of 1.0 g of water through l.00 C. 1 calorie = 4.18 Joules. Sometimes heat is expressed in kilocalories (kcal), where 1 kcal = 1000 calories.

Heat energy can either be gained by the system or lost from it whenever there is a change in the state of the system. The amount of heat (q) gained or lost is directly proportional to the mass, m, of the system and the change in temperature.

The constant of proportionality is called the specific heat of the substance.

Here Ti and Tf are the initial and final temperatures respectively of the system. So,

Lavoisier and Laplace’s law of Thermochemistry

Entropy Change in an Irreversible Process