(i) At the matured stage, neck canal cells and venter canal cells eventually fuse making a canal. This canal is usually filled up with sugar enriched sticky substances

(ii) Antherozoids being attracted to the sugar, swim to Archegonium and enter the venter and fertilize the ovum

(iii) The ovum being fertilized by a single sperm (n) produces a diploid cell (2n) called zygote or Oospore.

Later, the zygote (2n) undergoes division and development and gives rise to a sporophyte. 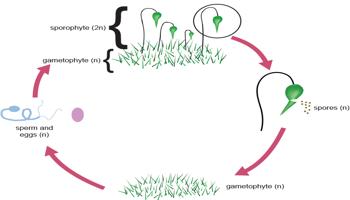 (i) The capsule is present at the tip of moss sporophyte. Spore mother cells inside the capsule undergo meiosis cell division producing haploid spores (n).

(ii) When the capsule gets maturity, the haploid spores come out breaking off the capsule wall

Later, protonema turns into buds and ultimately they grow up to gametophores.